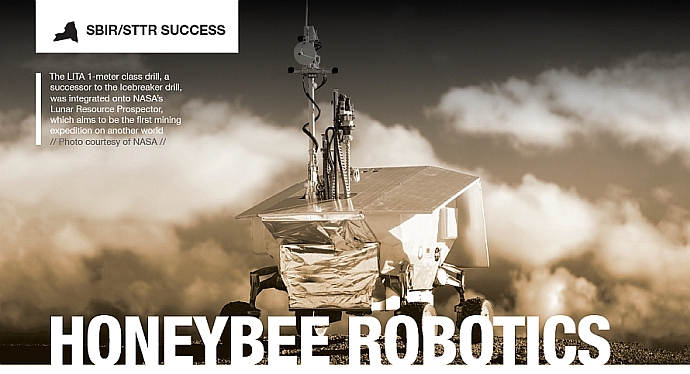 In the search to find extraterrestrial life, one mantra says it all: Follow the water. Wherever water flows on Earth, one can be sure to find life – and that principle may well transcend to other worlds. NASA has been investing in technology that can go beyond what one can assess from the surface; drills that can reach meters below the surface to more habitable environments, or hundreds of meters below ground into large water-bearing formations. By aligning with NASA and setting its sights on Mars, Honeybee is hoping to reach new depths during planetary exploration that were previously untouched.

Brooklyn, New York-based Honeybee Robotics has spent over fifteen years developing advanced robotics systems and planetary drills that allow scientists to explore planets in three dimensions. The company’s meter-class drill extraction systems were originally intended for lunar missions. Honeybee had a vision of sustaining a human or robotic presence on the Moon to mine local resources from a central base, thus decreasing the cost and wait times associated with sending them up from Earth. “Water is one of the most precious resources in space,” explains Kris Zacny, Vice President of Honeybee Robotics and Director of Exploration Technology. “Once you get water you can sustain human presence; you can break down the molecules into hydrogen and oxygen so astronauts can breathe, without the need to bring extra tanks. Hydrogen and oxygen can also be utilized as a propellant to either come back or to explore farther. It extends the life of all missions.”Although the drill’s objectives were originally intended for the Moon, NASA switched gears and set its sights on Mars – where with similar performance the drill could potentially meet the same resource-collection goals while also aiding the search for life beyond Earth. Honeybee got its break to help NASA address this exploration goal when it began applying for NASA Small Business Innovation Research (SBIR) awards to refine its lunar drill system and make it suitable for Mars missions. Magnetic fields protect planets from charged particles in space. Since the magnetic field of Mars is only a fraction of what it is on Earth, anything on the surface or slightly below would likely be sterilized or killed by charged particle radiation or UV light penetrating Mars’ thin atmosphere. The Icebreaker, as it was eventually named, was designed to drill 1–2 meters, which has never before been achieved on Mars. The system would also have to be autonomous and would need to be comprised of the right materials in order to withstand the sterilization requirements for planetary protection.

“This particular SBIR project was really the turning point for us,” reflected Zacny. “The technology developed under this program has been integrated in every single drill system that we have developed since.”Serendipitously, the SBIR and STTR Reauthorization Act of 2012 gave Honeybee and NASA the opportunity to expedite this technology, with the implementation of the Commercialization Readiness Program (CRP). With SBIR alone, NASA invests in early research and development for technology they eventually need, even though NASA may not be ready to infuse it into a specific mission. CRP is designed to help make the SBIR technology more ready for commercial applications, including infusion into NASA’s missions. CRP allows for funding additional work, until the mission is ready to infuse the technology; enabling that infusion to be expedited. With CRP, small businesses like Honeybee can provide component technologies that large prime contractors utilize while helping small businesses become a vital part of the supply chain. These solutions include systems designed for drilling, coring, and physical sampling of Mars, the Moon, Venus, Europa, comets, and asteroids. Mining resources from asteroids is an on-going project for Honeybee through technologies such as its Asteroid Water Extractor, both to gather water resources to refuel orbiters around the Earth and to support human spaceflight.

Among other planetary exploration technologies, Honeybee is currently improving its Planetary Deep Drill, which could penetrate hundreds of meters into the water-rich Mars polar ice caps and Jupiter’s moon Europa. The four-meter Planetary Deep Drill contains all of the motors, electronics and sensors required for operations while using an efficient rotary percussive drilling technology. The current drill can operate on as little as 250 Watts of power – less than many consumer-grade drills you could buy at Home Depot. Although Honeybee’s work on the 1-meter class drills transitioned to the newer systems designed primarily for Mars, NASA didn’t want to give up its lunar missions. Focused within the polar regions of the Moon, NASA is planning to collect and analyze samples of water and other volatiles from one-meter depth through a follow-on Phase III contract with Honeybee worth approximately $1 million.

Commercially, Honeybee is exploring opportunities in the energy sector thanks to its early R&D work with NASA. The company has just received funding from one of the largest oil and gas contractors in the world to develop a specialized percussive system, which uses cam spring technology to generate blows of constant energy independent of blow frequency while operating in a vacuum environment. This is an alternative to conventional hammer systems, which provide higher energies at higher frequencies. Another followon Phase III contract with the Department of Defense involves the development of a robotic geotechnical system, which also stemmed from its SBIR-funded technology through NASA. The geotechnical tool performs all actions related to driving a rod into the ground, depth measuring, and data processing autonomously. “We wouldn’t be where we are right now without the CRP and SBIR programs,” says John Abrashkin, Director of Marketing at Honeybee Robotics. “It has essentially enabled us to build systems that can go to the Moon and to Mars and even Europa. We are developing critical technology that nobody else wants to invest in; it’s risky. But if they pay off, as they have, they allow NASA and other government agencies to procure needed technological innovations and set their sights on new missions that were never before possible.”