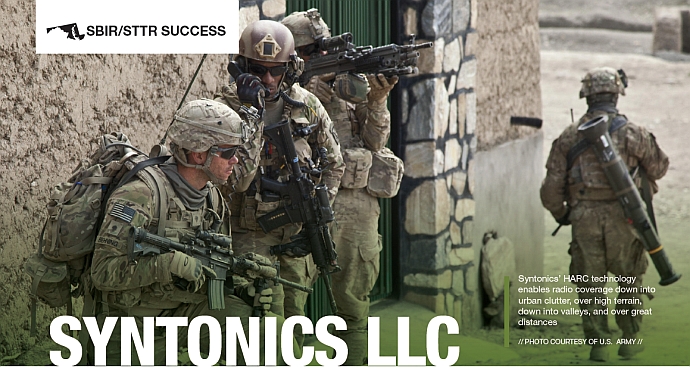 There is nothing more vital in a battlefield than having optimal communication, and Syntonics has made this its mission since its founding in 1999. The company’s second SBIR technology – Handheld Tactical Antennas – dramatically increases the communications range needed for critical missions by using handheld devices that are rugged, lightweight, and have low visual profiles. While the technology originally began as a USSOCOM Small Business Innovation Research (SBIR) project, Syntonics has since developed a suite of tactical antennas with product revenue reaching $3.3 million.

“Our handheld tactical antennas are much more rugged and noticeably lighter than the competition, enabling military personnel to communicate reliably without fear of breaking a fragile aluminum antenna,” says Syntonics President Bruce Montgomery. “Because this is a novel design, with a patent issued on its rugged features, we’ve found good demand in the special operations forces.”

These antennas came on the heels of another hugely successful Syntonics technology that was also originally funded by the USSOCOM SBIR program. FORAX, which stands for Fiber Optic Remote Antenna eXtension, got its big break when a purchase order came in 2007, during the Iraq war. The Army wanted to put some of its antennas up on their surveillance aerostats to extend the brigade’s communications down into urban clutter and far out into the desert. Syntonics responded by running the radio signals for multiple radios over a single optical fiber in the aerostat’s tether, up to antennas high overhead on the aerostat. This started the High Antennas for Radio Communications (HARC) product line.

HARC implements the aerial layer without flying the radios; the radios stay on the ground and only the antennas are high in the air. At SOFIC 2016, Syntonics introduced its newest additional to the FORAX-HARC lineup: HARC-Tethered Drone. HARC-TD is a lightweight expeditionary system that flies an antenna for a UHF radio as high as 500 feet, so communications can reach out to 25 miles. This airborne drone is electrically powered via its tether and can fly indefinitely, for hours or days.

Commercially, HARC-TD can be used for communications by first responders, or search and rescue teams, or wildland fire fighters. For example, if a search is being executed for a lost child in the woods, usually the search and rescue teams are given walkie-talkies, which are only effective over short distances. However, by deploying one of Syntonic’ 500-ft.

HARC-TD systems, teams can talk all over the county, over mountainous terrain, down into urban clutter, or any other sort of barrier.

The company’s newest endeavor is a Sniper Projectile Detection Radar – SPiDR – an ultra-wideband, stealthy radar optimized to detect incoming fast projectiles of all types. SPiDRHelicopter alerts a helicopter crew to hostile shooters. The complementary component to this technology is SPiDR-Tactical, a USSOCOM SBIR project starting in 2016, which uses a wideband radar that is packaged into a conformal, flexible film that lays under a helmet’s fabric cover.

Syntonics’ FORAX suite of products has generated over $50 million in sales to date. Montgomery credits the SBIR program with helping his company launch his products into mainstream markets.

“Syntonics was built completely on the DOD SBIR program,” adds Montgomery. “I’d like to think we could have ‘cracked the code’ of selling products to DOD without the program, but unfortunately I can’t. In this industry, you need hard work, luck, and successful SBIRs, and only then do you have a prayer of growing beyond a very small company.”