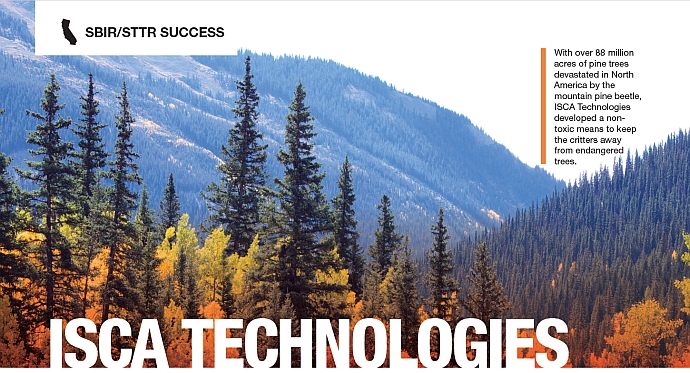 Driving 3,000 miles across the country from California to New York certainly presents ample opportunity to take in our nation’s scenery. But it was a particularly frightening scene in Colorado that prompted Dr. Agenor Mafra-Neto to take action.

Cruising through the Rocky Mountain National Park with his family, they noticed mountains completely covered with dead pine trees. This was the devastating effect of mountain pine beetles (Dendroctonus ponderosae) – a species known to attack and kill several of the pine tree species of the region.

In 2008, over 1.15 million acres were affected in Colorado alone, with more trees being attacked every season. According to an annual assessment by the state’s forest service, just in 2013 another 264,000 acres of trees were infested by the mountain pine beetle. It was clear the state’s population of trees was dangerously dwindling, but the problem extended far beyond the Rockies. Today, all 19 western states and parts of Canada are dealing with mountain pine beetle attacks, and this ongoing area-wide-infestation has devastated an unprecedented 27 million acres of forests. This major shift has not only caused eco-system disruption, water contamination, and rising carbon levels in our atmosphere, but thousands of miles of power line damage due to falling trees and destruction of property due to mega fires.

“Mountain pine beetles have a very complex way of attacking trees,” explains Dr. Mafra-Neto. “They are initially attracted to a pheromone released by the first pioneer beetles that attack a single pine tree, which induces all the other beetles in the vicinity to start pairing and mate and attack the tree, burrowing into the bark, creating galleries where they lay their eggs. Beetles have to rapidly overwhelm the defenses of each one of those trees by bringing lots of beetles to colonize that tree. However, they cannot have too many colonizing because the food for the larvae is limited. So there is a moment when they stop other beetles from coming by releasing a repellent pheromone that essentially says ‘no more.’”

The repellent pheromone, called Verbenone, is the key to ISCA’s proprietary technology, appropriately named SPLAT® Verb – Specialized Pheromone & Lure Application Technology. Dr. Mafra-Neto knew if he could formulate Verbenone into a long lasting formulation that could be applied to pine trees, there was a great chance it could protect them from beetle attacks. Through Phase I and Phase II SBIR grants with the U.S. Department of Agriculture (USDA), this theory was proven.

“The first year of the grant we applied it on trees in areas under extreme bark beetle pressure and found that SPLAT Verb protected 100 percent of the treated trees,” recalls Dr. Mafra-Neto. “Meanwhile there was a 93 percent mortality rate on the other trees that hadn’t been protected.”

This high level of protection was confirmed when SPLAT Verb was applied to protect sugar pine trees that survived the rim fire in Yosemite National Park, CA from May to September 2014. A total of 86 mature, uninfested trees were treated with SPLAT Verb prior to MPB flight, in an area previously identified as experiencing outbreak conditions. None of the SPLAT Verb-treated trees were lost due to beetle attack. For the Phase II SBIR, ISCA wanted to create a formulation that could be used in larger areas to prevent attacks.

“At the end of the Phase I SBIR grant, we had enough data to go after registration with the Environmental Protection Agency (EPA),” says Dr. Mafra-Neto. By doing that, we were able to begin selling directly to the U.S. forest industry.”

Before SPLAT Verb came along, the gold standard in protection of valuable individual trees from beetle attack was, and still is, to drench the entire tree with contact insecticides. Carbaryl, a popular chemical, provides very good tree protection as long as the entire trunk is covered by the application. But Carbaryl is considered by the EPA to be carcinogenic to humans and toxic to birds and wildlife. Because of the drastic need to replace this practice, ISCA is well on its way to finding distributors of the product. Today, homeowners, governments, and members of the forest industry can purchase SPLAT Verb directly from ISCA’s website or from a variety of distributors, including Amazon.

Another benefit to SPLAT Verb is the apparent “halo effect” of a treated tree. When the repellent formulation is applied to a tree, a “halo” is essentially formed around it, where all of the neighboring trees are also protected.

“Going forward, our focus is to get a large scale application of our product,” adds Dr. Mafra-Neto. “We are reducing the costs of Verbenone and creating something financially viable to protect large existing regions using our formula. To date, there hasn’t been much marketing into our product. It has worked so well and we are amazed how it has taken off with just word of mouth.”