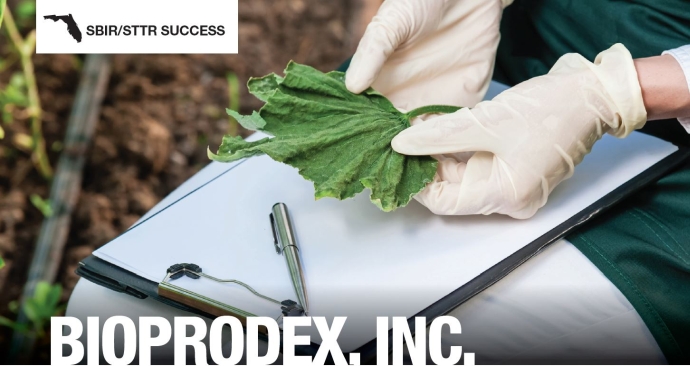 While most tend to think of weeds as one of life’s many inconveniences, farmers in Florida see them as a dangerous threat. Tropical soda apple is a highly invasive weed of South American origin that is now prevalent in the United States, Australia, and several other countries that crowds out native species and forage for livestock.

Rather than turning to harsh chemical herbicides, Dr. Raghavan Charudattan, President and CEO of BioProdex, Inc. discovered SolviNix®LC, a new, natural way to control the spread of this invasive species. SolviNix®LC is a bioherbicide for tropical soda apple (Solanum viarum Dunal). The active ingredient in it is a naturally occurring plant virus, Tobacco mild green mosaic tobamovirus strain U2.

BioProdex is a biotechnology company founded in 2003 and its core business is research, development, sales, and service of biological products for pest control and environmental protection, contract research, and biopesticide consultant services. BioProdex’s first commercial product is SolviNix® LC, but its vision is to develop, market, and promote a line of biologically based, “green” pesticides for conventional and organic agricultural production, home and garden, parks and recreational sites, conservation areas, and other specialty markets. This vision and plan for success began even before the company submitted its first Small Business Innovation Research (SBIR) proposal.

“When I went into the SBIR program I already had completed the discovery and background research on the virus and had a sense of its potential for commercial application. We knew that the virus could be purified and produced fairly easily in the laboratory. The SBIR program helped to realize the idea by enabling development of proof and data to be submitted to the EPA. The SBIR also made possible the development of an industrial process to mass produce the virus,” said Dr. Charudattan. “SBIR helped us to grow from our kitchen sink to our current level of commercial success, essentially, SBIR took us from test tube to market.”

This virus-based bioherbicide technology was developed by Dr. Charudattan and his research team at the University of Florida-Institute of Food and Agricultural Sciences. BioProdex obtained the exclusive license to this technology from the University of Florida Research Foundation, a minority shareholder in the company, and having fully developed and commercialized, the company now owns the technology. BioProdex’s proprietary process to mass-produce the virus used as the active ingredient in SolviNix®LC is fully scalable to meet elastic market demands. The company envisions the virus as a platform to develop other analogous bioherbicides. The virus is also a biomaterial of interest for nanotechnology and medical applications.

The U.S. EPA granted BioProdex a Section 3 registration for SolviNix®LC making it the world’s first EPA approved biological herbicide containing a plant virus as the active ingredient. In discussing what it took the company to go from a discovery, to SBIR, and into the commercial arena, Dr. Charudattan provided the following insights: “Have a very clear idea of what it is you want to accomplish with the SBIR grant – a very specific goal and specific plan for how to use the funding. You have to begin with both a clear work plan and a clear marketing plan so that you know what to do after the SBIR funding is up.” Dr. Charudattan went on to explain how the SBIR program differs from academic research.

“Academic research is a good way to make discoveries, but with the SBIR project the discovery also should hold a clear promise of a tangible product or service. SBIR helps take you from basic research to bringing a product to market, which is the most difficult thing to do. With the help of the SBIR, and the IR-4 Biopesticide Program, BioProdex was able to make a successful case to the EPA to register SolviNix®LC; without this help, it wouldn’t have been possible for the company to register SolviNix®LC and embark on Phase III.”

Dr. Charudattan has been able to leverage his knowledge and experience in the discovery, product development, large-scale production, formulation, and regulation of biopesticides and bio-based technologies for pest management and environmental protection to offer consultant services and contract research to clients. Controlling pests in agricultural production, the environment, and around homes is expensive and the growing concern over the harmful effects of synthetic chemicals in the environment has created a demand for eco-friendly and healthful alternatives. Organic food production, prohibits the use of synthetic chemicals in production, creating a need for bio-based pesticides.

“I like to use the cake recipe analogy when comparing academic research to the type of development that occurs with the SBIR program. With basic research you know your recipe works in your kitchen, but to sell to the public and make money you need to know that some entity like Sarah Lee can buy or license the recipe from you, bake the cake on a large scale and in a profitable manner and sell it in the mass market. You have to be able to ask and answer questions like this in order to become successful.”

Today, big corporate ranchers buy the product as well as small family owned operations because they feel it’s a better solution. Replacing chemicals with bioherbicides can lead to better overall agricultural stability as it is less disruptive to the food web. BioProdex has expanded its reach and is partnering with a company in Brazil that wants to register and use SolviNix®LC there for different native weeds in the same family. BioProdex already has the permits in place for Brazil and is looking to expand into other countries, including China.

“We are in a very small, specialized field, and there are only about six or seven bioherbicide products in the U.S., Canada, and Australia on the market. We’d like to move onto a second and third bioherbicide, for having a diversity of products and markets is key,” said Dr. Charudattan.

With an eye to the future, other R&D projects in the BioProdex pipeline include determining the feasibility of using SolviNix®LC to control other solanaceous weeds, exploring the use of microbe-infused organic mulches to control weeds and root diseases in crops and home gardens, and finally, developing bioactive microorganisms that produce novel biochemical for pesticides, plant growth regulators, plant health promoters, or pharmaceuticals.