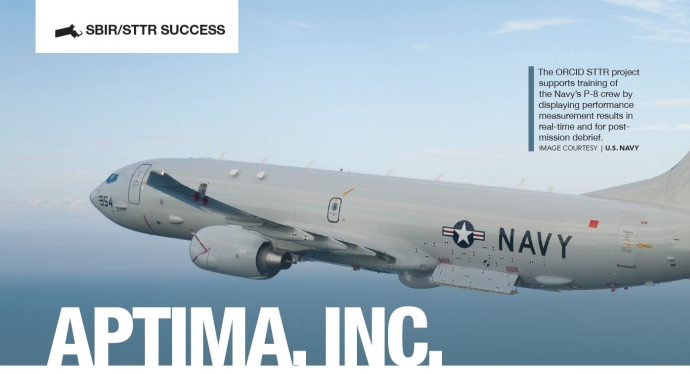 Simulation training for Naval Air Crews is a necessary precursor to the job. Real-world scenarios can be practiced and addressed within the simulator in high fidelity to better prepare for high-risk operational missions. While the quality of simulation training has steadily increased over the years, instructors often face difficulties assessing the performance of trainees, as no method existed that could capture, analyze, and display results in real-time.

If such a system were developed, the instructor could not only assess how the trainee was performing, but maintain situational awareness of other components in the simulated scenario, and coordinate diagnostic activities amongst a team of instructors and exercise controllers.

Setting out to address this need, Aptima developed a system that could do all of these things. ORCID, short for Optimized Real-time Complex Information Display, began as a common operating picture (COP) that displays both trainee performance and physiological data to instructors in real-time, for the purposes of communicating any issues found within either the system or trainee activities.

The team at Aptima utilized funding from the Navy’s Small Business Technology Transfer (STTR) program and Naval Air Systems Command (NAVAIR) to deliver this solution. ORCID was originally designed to provide solutions for helicopter air crew training, however over the course of seven years and a back to back Phase I and Phase II project, ORCID evolved into one of the Navy’s most valuable tools for simulation training on fixed wing platforms.

“Between the Phase I and Phase II, the Navy expressed interest in changing the common operating picture to be more specific to performance measurements,” recalls Courtney Dean, Associate Division Director for Aptima’s A-Measure product team. “So we asked ourselves, how do we measure the training behavior in the context of the mission to determine if the trainee is developing the skills needed to do what they do? It then started to become a timeline display of performance measurement results.”

Concurrently, Aptima designed and developed a supplemental software system that captures performance data within the simulated environment. PM Engine is a software application that taps into a simulator’s data feed, or log files, and assesses performance against known standards automatically. PM Engine plugs into the ORCID timeline, posting its results in order to effectively communicate results to instructors as the events unfold. The data is then immediately available to debrief the student. What did they do right? What did they do wrong? What could be done differently?

A Phase III contract with the Navy soon followed,and Aptima’s ORCID system is currently being integrated with the agency’s P-8A WTT simulation platform for real-time performance measurement results. In looking back at the transition fueled by the SBIR program, Aptima reflected on how flexibility and support in their R&D work paved the way for the company’s success with the U.S. Navy. Particularly, Aptima credits the perseverance of their TPOCs within NAVAIR, who championed the cause and were committed to transitioning products into key programs.

“The SBIR program enables many new companies to research and develop new solutions needed by the government, while simultaneously expanding their range of products and capabilities,” says Dean. “As a company, we were able to use the SBIR program to branch out from our original focus on organizational engineering to human performance measurement, advanced cognitive training systems, and analytics, modeling and simulation. The SBIR program was an integral part of Aptima’s capabilities and company growth.”

That growth is apparent in its job creation – Aptima went from a small, 2-person company to employing over 120 people with offices all around the United States. One of Aptima’s most notable SBIR successes was the development of SPOTLITE®, for which Aptima won a Tibbetts Award. SPOTLITE is a mobile performance assessment tool that was used by the Air Force Research Lab for accurately measuring the performance of F-16 pilots in training. With $11 million in resulting revenue, SPOTLITE was the catalyst for the company’s creation of a new, dedicated division. Used with supplemental systems or as a standalone application, SPOTLITE is a mobile app available on Android, Apple, and Windows which allows observers to subjectively rate and understand the performance of students and instructors in real-time using predefined behaviorally anchored rating scales, checklists, and other ratings that represent mission essential tasks. As one of Aptima’s flagship products, SPOTLITE has been used within the Army, Navy, and Air Force, and is widely recognized as the company’s most successful SBIR-funded innovation.

September was another banner month for Aptima. The company was once again named to Military Training International’s 2016 Top Simulation and Training Companies for the 11th consecutive year and awarded its third Blue Ribbon for Innovation.