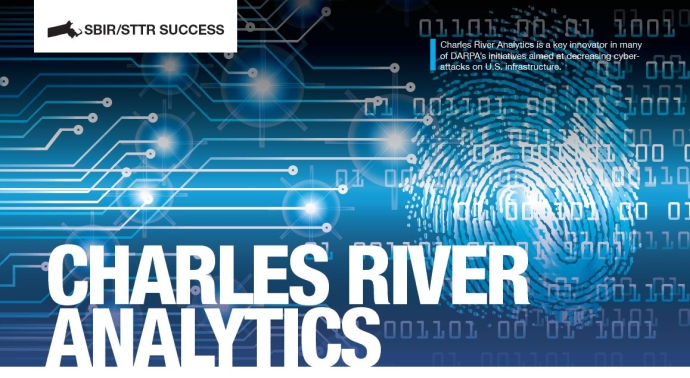 Cyber security and defense are dominating the national headlines, and for good reason. With more and more classified data and military secrets housed online, the U.S. government continually seeks solutions on how to best protect this information. Charles River Analytics, a small business based in Cambridge, MA, has long been partnering with the Defense Advanced Research Projects Agency (DARPA) to realize these goals. Since 1983, Charles River has developed a variety of custom intelligent systems for its government and commercial clients to support human-centered decision support.

“Every DARPA program we’ve worked on has been built on a stable SBIR technology,” says Karen Harper, President of Charles River Analytics. “SBIR has proven to be a substantial component of the way we transition into the full and open competition space. Over the past ten years, most of our growth has been accelerated by using SBIR technology and capabilities. The program is a funding tool to empower small business innovation. We cannot base program concepts solely on abstract ideas; we need mature technology to power our innovations. As a small business, we have world-class scientists that are experienced in proposing cutting-edge ideas, but we do not have the internal research and development funding to bring those ideas to fruition in software and systems. The SBIR program provides that missing link and accelerates the development of next-generation technology.”

In 2010, DARPA launched The Cyber Genome Program to combat the growing threat of cyber attacks on U.S. resources. Charles River Analytics was a key contributor to this initiative and transitioned several SBIR-funded projects to the program. The project encompassed several programs and technologies aimed at developing the cyber equivalent of fingerprints or DNA to help determine the identity, lineage, and provenance of digital artifacts and users.

Charles River developed a system that conducts Malware Analysis and Attribution using Genetic Information (MAAGI) as part of the Cyber Genome project, which combines ideas and techniques from biological evolution, reverse software engineering, and linguistics to rapidly identify the source and intent of new malware attacks. In a subsequent contract with DARPA, Charles River developed a system called HAMLET - How to Avoid Malice Using Linguistics-Inspired Exploit Testing. The contract, valued at $2.4 million, seeks to help protect commodity IT devices, such as printers and phones commonly purchased overseas, from destructive cyber attacks.

At United States Special Operations Command (USSOCOM), the agency is partnering with Charles River Analytics to support the research, development, and sustainment of tools that improve the workflows of critical functions in fielded Programs of Record (PoRs). In this role, Charles River has been responsible for identifying new R&D concepts, often resulting from SBIR programs, adapting them to meet the needs of SOCOM operators, and integrating these novel technologies into PoR baselines.

Charles River’s technology capabilities span government agencies, and aren’t just limited to the Department of Defense. At NASA, the company was just awarded a contract to measure and assess astronaut workload. The system for Cognitive Assessment and Prediction to Promote Individualized Capability Augmentation and Reduce Decrement, or CAPT PICARD, is designed to prevent common ailments facing astronauts such as disrupted sleep, fatigue and stress brought on by long-term motion exposure and lack of gravity. The system measures, assesses and predicts cognitive workloads so that mission control can respond more effectively.

In looking back at the history of both winning SBIR contracts and transitioning technologies, it appears luck must play a role in the company’s success. However, it is actually the business model of custom tailoring their capabilities to match their clients’ needs that has propelled Charles River into the spotlight and supported unprecedented growth.

“It is very rare that our team is looking at an opportunity from the perspective of – how do I make my technology apply to this problem?” explains Harper. “We have never said, well we build ‘x,’ so let’s find a problem that ‘x’ can fix. It is much more about understanding the context of the problem, the current state of the art, current shortcomings in operation, and the drivers of increased capability or improved performance. We have built a workforce of problem solvers who are focused on identifying and developing technical solutions driven explicitly by operational problems and user needs. Once we build these new technologies, we then apply those to larger problems and systems.”

Today, Charles River employs about 150 people throughout Massachusetts and Rhode Island. While most of its systems are sold directly to government clients, the company is pursuing opportunities on commercial paths. Harper credits the company’s location in Massachusetts as having access to a wide array of opportunities present in the greater Boston area for high tech small businesses. Charles River regularly attends meetings hosted by the New England Innovation Alliance (NEIA), a group of small high technology firms that are also very experienced in the SBIR arena.

The combination of forging elite partnerships within the government, access to SBIR dollars, a strategic location in a high-tech hub, and keeping an open mind have proven to be the potion of success for Charles River Analytics.