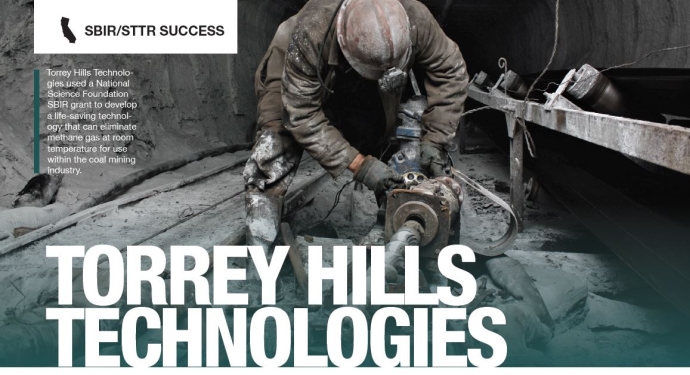 Coal mining accidents, though much rarer than they used to be, continue to plague both the United States and countries all over the world. Recent coal mining accidents in Turkey and China have garnered international attention and have furthered the need for a preventive technology aimed at saving lives. Torrey Hills Technologies, a small business located in San Diego, California, wasn’t really in the business of coal. But that didn’t stop them from developing this in-demand technology that would ultimately provide the mechanism for preventing these disasters.

“We saw a problem, and we borrowed from a different industry to attack this problem,” says Ken Kuang, President of Torrey Hills Technologies and a best-selling author on entrepreneurship. “We used our expertise from the chemical and photo cell industry and invented a mechanism to remove the explosive gas at room temperature within a coal mine.”

The catalyst was a 2010 explosion at Massey Energy’s Upper Big Branch coalmine in West Virginia, which killed 29 miners. Kuang, an expert in microelectronic assembly and packaging, wanted to develop a method for preventing accidents such as this one. The team at Torrey Hills studied the coalmine industry extensively and decided that some of their existing technologies in the packaging industry could be refigured and redesigned to capture this methane gas at room temperature.

Torrey Hills Technologies had long been a leader in developing and delivering quality, affordable materials, fabricated parts, and equipment for multiple industries including the chemical and electronics sectors. However, to tackle this particular problem, they used a grant from the National Science Foundation (NSF) Small Business Innovation Research (SBIR) program, and the company subsequently was able to prove it could meet critical needs that span industries.

The SBIR project, titled Capture and Use of Coal Mine Ventilation Air Methane (VAM), supported the development and commercialization of Torrey Hills’ patent-pending technologies that can significantly reduce the risk of coalmine gas explosions. Not only did the company win a Tibbetts Award for the development of the life-saving technology, but talks are in the works with a major coal company in China to produce and deliver the system.

Torrey Hills is no stranger to delivering high-demand technologies that it sells to customers worldwide. Perhaps the company’s biggest monetary success is its Award Winning (Golden Bridge Award http://threerollmill.com/goldprize.html) Three Roll Mill machine, which is used as a chemical mixer in many different industries, from the ever-expanding pharmaceutical industry to the chocolate making industry.

A Three Roll Mill is named after its three horizontally positioned rollers. Each roller rotates in an opposite direction from the adjacent roller with a tiny gap between them, creating tremendous shear force that can finely disperse, mix, refine or homogenize viscous materials. They are widely used to mix electronic thick film inks, high performance ceramics, cosmetics and more. Customers like Boeing, Godiva, GM, HP, NASA and Philips all use Torrey Hills’ Three Roll Mill.

Torrey Hills’ machine competes worldwide with manufacturers from Germany, and everything is homegrown and made in the city of San Diego. Kuang, who speaks nationally on inventing and copyrighting, says there are many advantages to doing business within the state of California, particularly the “talent” draw. He also explains why the SBIR program has been so beneficial for the growth of his small business.

“The U.S. culture is very different than most others,” he explains. “Here, you must listen to customer feedback. For instance, a lot of our users are women, and so you must incorporate a lot of features that are desired by women. The SBIR program is also very fascinating. You don’t find it in any other countries. In China, whenever they try to stimulate the economy, they give money to state-owned enterprises, and there is a lot of waste. SBIR is a mature system, it’s an ecosystem really, and it is one of the best ways to utilize taxpayer money.”

In addition to a Tibbetts Award, Torrey Hills made INC 500|5000 List five times and Kuang won the President Award from International Microelectronics and Packaging Society (IMAPS) twice in 2008 and 2012.

“Many people admire the way we invented new ideas,” adds Kuang. “The real secret is not to reinvent, but to benchmark from a different industry.”