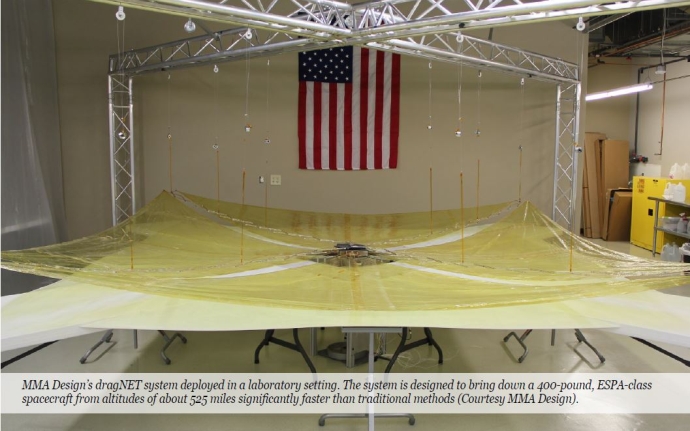 With the backing of the Air Force Small Business Innovation Research/Small Business Technology Transfer (SBIR/STTR) Program, MMA Design LLC created and successfully demonstrated a system to remove satellites from orbit that has attracted millions of dollars in investment from outside the SBIR program.

Also known as a deorbit module, MMA Design’s dragNET system can be added to an existing spacecraft late in the integration stage and is adaptable to various classes of vehicles.

More than 11,000 man-made pieces of debris are buzzing around in a low-Earth orbit. Fragments pawned by the collision of those pieces, along with an increasing launch rate and accidental on-board explosions, have created a growing field of debris that poses a significant risk to our satellites. The best way to shrink the debris field, or at least slow its growth, is to remove satellites from orbit quickly after the end of their lifespan.

International guidelines also call for satellites in low-Earth orbit to deorbit in less than 25 years, but many of their operators have requested waivers.

Conventional approaches to deorbit satellites have been limited to adding massive, expensive propulsion systems or relying on slow, natural decay from atmospheric drag. That prompted the Air Force to call on industry for a better way to manage the space environment from the start of mission planning.

Under a SBIR contract managed by the Air Force Research Laboratory’s Space Vehicles Directorate, the company’s goal was to achieve deorbit without impacting a satellite’s mission performance. MMA Design’s dragNET significantly decreases deorbit time by increasing drag area for spacecraft or launch vehicle assets. The dragNET system consists of a lightweight, compact thin membrane that is released by a simple heater power circuit. Once deployed by the release of spring energy and tensioned, the membrane creates the necessary resistance to passively deorbit the spacecraft or launch vehicle. Although it only weighs about six pounds, the system can bring down a 400-pound, ESPA-class spacecraft from altitudes of about 525 miles in less than 10 years.

Through the development process, MMA Design also garnered assistance from the Air Force SBIR/STTR Commercialization Readiness Program to demonstrate the technology on one mission and get it deployed on a second platform.

MMA Design leaders tout SBIR as a jumpstart for its engineers to showcase their talent by delivering a product to the military and opening the door for a wide variety of potential commercial applications.

The dragNET system also spawned the development of a deployable antenna architecture that includes RF antenna capabilities over a wide range of frequencies. MMA Design earned additional SBIR funding to pursue that effort.