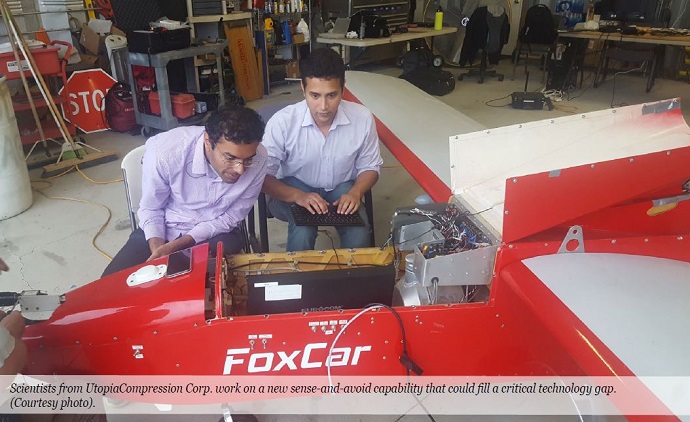 Advanced Research Projects Agency (DARPA) – has developed and recently tested a sense-and-avoid capability that uses passive equipment and does not require the host unmanned aircraft system (UAS) to maneuver. That combination allows other aircraft as small as a Cessna 172 to be detected and tracked at a distance of up to three nautical miles, which is a significant advancement compared to existing technology.

Because of its success, UtopiaCompression has attracted additional support from the Air Force SBIR

Commercialization Readiness Program as well as DARPA, which is managing the current project. Company officials are aiming for the advancement to have a transformational impact on the process of integrating UAS into the Federal Aviation Administration’s NextGen, the comprehensive overhaul of the National Airspace System, by removing a major technological barrier.

Additionally, this technology could eventually improve the situational awareness of general aviation pilots if it can be sufficiently miniaturized for installation in the cockpit.

“This sense-and-avoid system has the potential to enable a wide range of manned and unmanned systems to safely integrate into an increasingly populated and complex airspace,” said Dr. Dan Patt, a program manager in DARPA’s Tactical Technology Office. “Working with the Air Force rallies joint resources around an important problem and brings Air Force expertise to bear on these emerging technologies.”

Passive electro-optical/infrared sensors are attractive for collision avoidance on all classes of UAS – also known as remotely piloted aircraft, or RPA – because of their low cost, size, weight and power requirements. However, those passive sensors traditionally suffer from the drawbacks of high false alarm rates and an inability to determine a range to the target without maneuvering.

The Air Force SBIR requirement was for UtopiaCompression to develop a practical and effective approach to accurately estimate the range from an RPA to a relatively small aircraft up to a few nautical miles away with passive sensors and without requiring deliberate action.

An analytically proven, practical approach for maneuver-less monocular, passive range estimation – which represents the first practical solution to a decades-old problem – forms the basis for this innovative technology.

The company’s system incorporates a camera and a lens system, along with a Global Positioning System/inertial navigation system unit, all of which provides imagery and aircraft attitude data for detection and tracking.

The information is fed into a proprietary algorithm to estimate the state of an intruder. If a mid-air collision is predicted, an alert is triggered to give the RPA time to autonomously avoid a potential disaster.

UtopiaCompression’s system filters out false positives by removing tracks that do not match an intruding aircraft’s profile, such as those made by clouds or ground clutter. In flight demonstrations, the company reduced the number of false tracks by more than 50 percent compared to a baseline system that does not use passive ranging technology.

Earlier this year, the joint DARPA/Air Force effort completed the first successful flight tests of a shoe-boxsized, plug-and-play system designed to enable manned and unmanned aircraft to automatically detect nearby aircraft and avoid mid-air collisions. Such a capability would be a game changer for small

RPAs that cannot carry bulky and power-intensive sensors, such as on-board radar. Even for large RPAs that can carry radar, having an additional ranging and collision-detection capability would provide a safeguard against radar defects.

A truly passive sense-and-avoid capability could also enable operations where radio frequency emissions can be detrimental. Future planned research aims to shrink the system size and mature key aspects, such as detecting aircraft below the horizon in poor light conditions.

UtopiaCompression currently has several sense-and-avoid programs encompassing novel payload design, embedded prototype development and modeling and simulation efforts. According to Dr. Joseph Yadegar, president of UtopiaCompression, the company is working with prime contractors and government agencies to transition the technology.