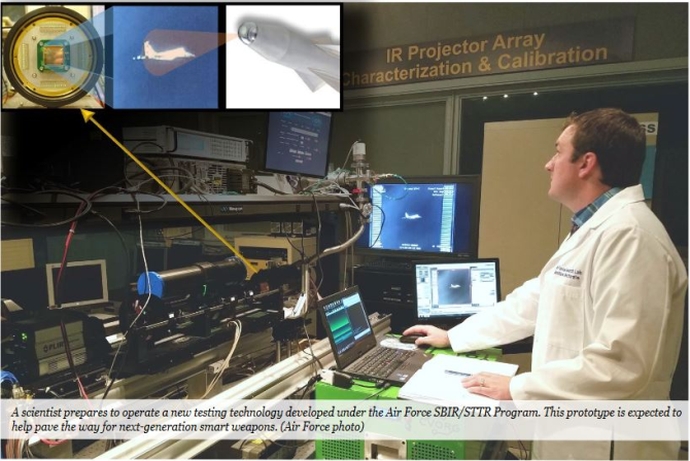 The next generation of smart weapons is a step closer to the warfighters’ arsenal because of a partnership between a Delaware-based small business and the Air Force Research Laboratory.

With support from the Air Force Small Business Innovation Research/Small Business Technology Transfer Program, Chip Design Systems LLC and its team of experts worked with AFRL’s Munitions Directorate to bridge the gap between newer smart weapon sensors and the ability to fully exploit those improved capabilities.

Smart weapons with Infrared imaging sensors are known for their accuracy and can provide big tactical advantages, but the path to their deployment requires extensive validation testing on the ground.

Smart weapons use infrared imaging seekers to detect and hit targets. While large amounts of money are spent developing this class of sensors, the industry has devoted much less funding toward test technologies.

In recent years, the infrared scene projectors used for testing infrared imaging seekers have seen only modest improvements in brightness, spatial resolution and frame rate. Meanwhile, those sensors have improved at a much faster rate, so the ability to test them has been severely limited.

By offering at least twice the frame rate and higher brightness, with the same image resolution of current micro-resistor based arrays, NSLEDS allows infrared scene projectors to keep up with newer imaging performance. As a result, the Air Force now has a means to test next-generation smart weapons that are able to detect smaller, faster moving targets in increasingly complex backgrounds.

Officials from Chip Design Systems say the Air Force SBIR/STTR Program was critical to building and integrating the system. Among the critical components funded were micro-infrared LED arrays that generate the infrared light; read-in-integrated circuits that allow the addressing and intensity modulation of each pixel; and the electronics and packaging necessary to demonstrate performance capability.

Chip Design Systems handled the tasks of read-inintegrated circuit design, package design and thermal modeling, while leading a team of experts including:

In early 2017, the NSLEDS project delivered a first prototype to Eglin Air Force Base for further technical evaluation and has already logged several hundred hours of operation.

This prototype paved the way for Chip Design Systems to receive a contract to create an even higher resolution device for smart weapon testing by the Air Force. By applying lessons learned and technology developed under NSLEDS, the company is now in the process of building an infrared LED scene projector with four times the resolution at a significantly reduced risk.

The innovation brought to life during NSLEDS is a solid example of academic research being transitioned to a small business to meet Department of Defense needs.

The roots of Chip Design Systems can be traced to research started more than a decade ago at the University of Delaware. There is still a close relationship between the two and a key to this latest advancement was intellectual property licensed to Chip Design Systems by the university.