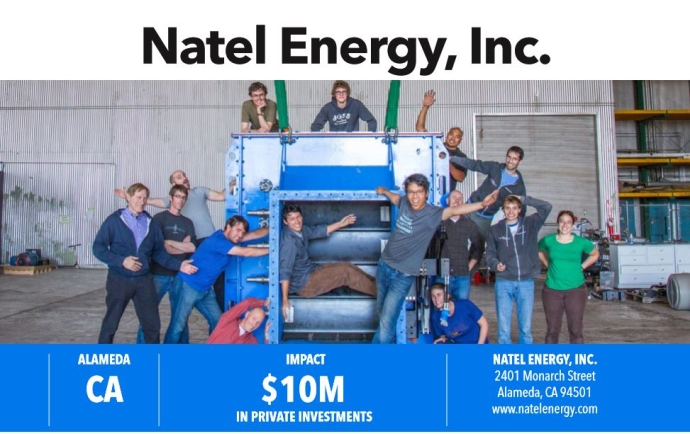 While water is the world’s largest developed source of renewable energy, hydropower comes with its share of problems. Traditionally, large dams or long penstocks are needed to accumulate pressure and harness this power, leaving a large environmental footprint and damaging surrounding ecosystems. Enter Natel Energy, and its patented EcoSmartHydro® philosophy. While conventional hydropower plants are designed solely to maximize power output, EcoSmartHydro networks are designed to maximize power output while maintaining the health of watershed ecosystems and the communities that surround them. The company’s hydroEngine® is at the heart of this technology. The hydroEngine delivers high performance and low cost for high flow, low head sites. It is more compact and less expensive than conventional lower head Kaplan or crossflow turbines, while delivering similar power. In addition, because it is an impulse turbine, it does not cavitate, enabling simpler civil works and reducing excavation by as much as 80 percent.

After a successful Phase I and Phase II award from the Department of Energy, Natel partnered with Apple to install its first commercial application in central Oregon. The Monroe Hydro project utilizes the existing irrigation canal to generate predictable, baseload renewable energy. Another Natel hydropower facility soon followed in Freedom, Maine and was selected for a PennWell Honorable Mention for Renewable Energy World’s 2016 Project of the Year.