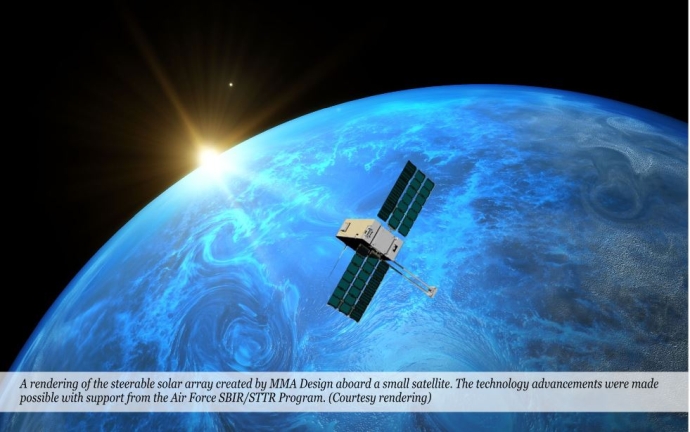 The Air Force will be able to use an emerging class of lower-cost satellites for more missions because of a better power source developed in partnership with a Colorado-based company.

With support from the Air Force Small Business Innovation Research/Small Business Technology Transfer Program, MMA Design LLC created a steerable solar array for CubeSats that incorporates processes typically used on larger, more complex and more expensive spacecraft. Also known as HaWK – which stands for High Watts per Kilogram, a performance metric – this new system allows groups of solar panels to be continuously adjusted toward the sun to capture the most energy possible.

The ability to achieve longer life and reliability while operating in more extreme environments is especially significant for the use of CubeSats, a relatively inexpensive, miniaturized satellite. The rise in CubeSats opens the door for massive amounts of research, testing and observation that wasn’t feasible with traditional satellites.

Initially, the Air Force deployed the HaWK technology from MMA Design for several low-earth orbit missions. The system was also purchased by NASA for the MarCO mission to Mars, which will provide the ability to quickly transmit status information about the Insight spacecraft while it lands on the red planet. The NASA mission, scheduled to launch in May, 2018, will be the first time CubeSats have been flown in deep space.

“The HaWK arrays from MMA Design were the only option because of their high power density and ability to fit on the edge of a CubeSat when the project started,” said John Baker, of NASA’s Jet Propulsion Laboratory.

While other companies are now developing comparable products, MMA Design, with the support of the Air Force SBIR/STTR Program, led the way in this critical arena.

The Department of Defense has a growing demand for smaller satellites that can support higher performance missions.  However, producing adequate power has been a challenge because of the inherent size constraints and static placement of solar arrays on those platforms.  Using the largest solar arrays that fit on CubeSats would also reduce payload capacity and result in a disproportionate share of the spacecraft volume and mass being allocated to power generation instead of sensors, radios and other capabilities.

With CubeSats, the fundamental issue is having to pack everything into a clearly-defined and highly constrained volume, so existing solutions won’t scale down to address those challenges.

HaWK – a foldable semi-rigid panel solar array, in which the panels fold over each other in multiple configurations – is designed to double the amount of power in small satellites and increase peak power by 300 percent. It supports higher performance by allowing small satellites to maintain greater power reserves while freeing the mission instruments to track an area of interest and/or accomplish other objectives.

Low-profile hinges allow the solar array to stow in a very thin package. Also, the system can use any type of existing or future solar cell and stows in much smaller spaces than the newer roll-out solar arrays, which typically require a flexible solar cell to be able to form a tight enough radius as they collapse for stowage.

HaWK also comes into play at the end of a satellites’ mission life, when it can be oriented to provide greater drag needed for deorbit.  This will help federal agencies such as the Department of Defense to comply with the 25-year requirement to bring down satellites from orbit and minimize the potential impact of debris.

Funding from the Air Force SBIR/STTR Program supported MMA Design efforts to create flight-ready solar arrays. Throughout that time, the company grew from three people to more than 20 employees and continues to expand.

That type of growth is a result of successful commercialization, a critical target for companies involved in the Air Force SBIR/STTR Program.

“The SBIR funding has also enabled 12 missions to be launched by 2018 and significantly increased our military and commercial sales,” said Mitchell Wiens, president and chief operating officer of MMA Design. “Our military and commercial sales have steadily increased and in 2017, our sales are projected to be three to four times that of 2015. This has also helped us to advance our technologies to larger, modular arrays for larger spacecraft requiring power up to 10 kilowatt, as well as spur technologies and innovation for our line of deployable antennas.

MMA Design is a recent winner of the U.S. Small Business Administration Tibbetts Award, which pays tribute to the best in SBIR achievements.