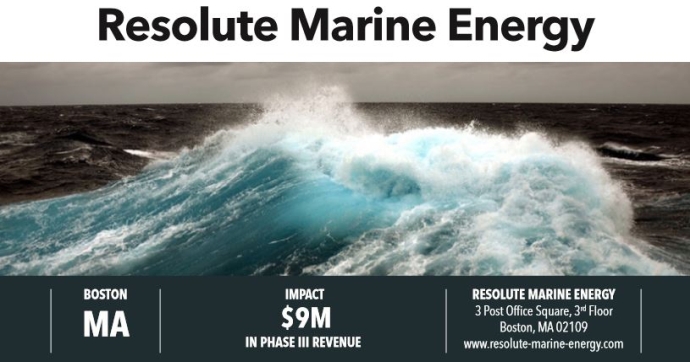 Resolute Marine Energy (RME) has stayed focused on one key goal: to provide fresh water to developing countries and islands where the lack of a robust electrical grid creates a reliance upon diesel-electric desalination systems to provide critical fresh water needs. Diesel-electric desalination systems are expensive, with communities paying upwards of $6.00/m3, which is three times the national average. Wave2OTM, the company’s solution to this problem, produces clean energy from the power of ocean waves that is used to desalinate the water. The technology evolved thanks to SBIR grants from the Department of Energy. The grants enabled RME to complete a $475,000 seed capital round and led to the completion of a subsequent $2.5 million Convertible Notes round led by a Boston-based impact investment fund.

Wave2O works by harnessing the movement of the waves, and this motion is transferred to hydraulic pumps that feed high pressure seawater to a turbine for electricity production and to a reverse osmosis desalination system for fresh water production. RME’s focus on water production has the benefit of virtually eliminating the technical challenges and costs associated with electricity storage because the Wave2O energy storage “battery” is a water tank. RME’s innovative technology is designed to address water shortages in “off-grid” areas of the world and initially in Africa and on Caribbean and Pacific Islands where RME has had success attracting several launch customers.