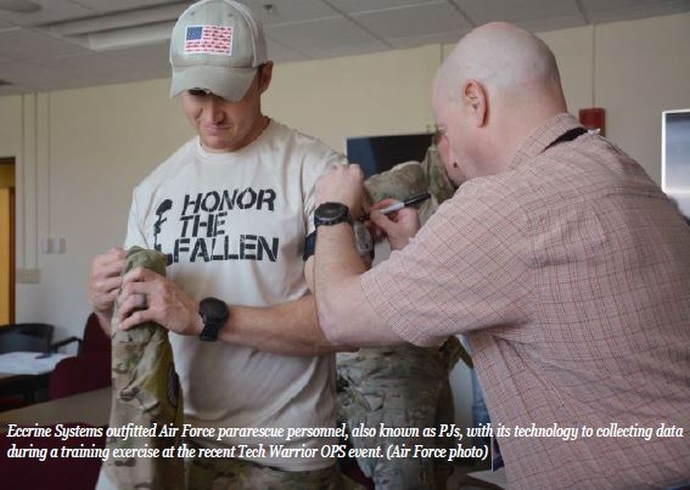 Eccrine Systems, for example, is planning a commercial rollout this fall of its first-generation sweat sensor, a product designed to improve the health, performance and wellness of users. The Cincinnati, Ohio-based company reports that its development plan has been accelerated as a result of participating in the Tech Warrior Enterprise, which now runs continuously.

“We’re putting technologies in the same room with their end user. That rarely happens,” said John Matecki, who oversees the Tech Warrior Enterprise for NCMR. “It’s a massive benefit of this event. They’re exposed to issues that don’t typically surface in a laboratory environment.”

Through its sponsorship of the Tech Warrior Enterprise, the Air Force SBIR/STTR Program matches small business technology with warfighters and other first responders to use and evaluate. This type of acceleration activity is intended to get refined technology to the field quicker and provide a massive boost for the small businesses that commercialize those products and services.

Eccrine Systems, for example, aims to provide a significant advantage to the American warfighter, industrial workforce and the athletics industry by providing a way to monitor people for dehydration in situations where heat stress is a significant issue. The company worked with the military along the development path, but perhaps the biggest strides it made were while attending Tech Warrior Enterprise events. For two consecutive years leading up to this most recent event, the company brought versions of the product to Operation Tech Warrior to gather feedback and make improvements.

“Tech Warrior is a great vehicle for small companies, like ours, to come in and get that end-user feedback under conditions we can’t possibly recreate back at the office,” said Mark Tierney, senior vice president of commercialization for Eccrine Systems. “If we can survive here, we can survive out in the real world.”

“The Tech Warrior Enterprise is a major investment, but it will drive technology like this sensor more quickly into the hands of the warfighter,” said Shahady, who also serves as director of the Air Force SBIR/STTR Program. “Our return on investment will be measured in lives saved and increased mission successes.”

The feedback provided to small businesses, such as Louisiana-based Carver Scientific, is proving to be invaluable. The company brought its microclimate cooling device, which was developed under the Air Force SBIR/STTR Program.

If perfected, the device could be a boost to special operations forces, security forces, police and firefighters – in particular, anyone who might have to carry more than 100 pounds of gear into and hot and hostile environment.

“It helps enhance mental awareness, it enhances homeostasis and it allows that warfighter to be operating for a longer period of time without cognitive issues,” said Ritchie Priddy, business development director for Carver Scientific.

“We want to be as flexible as possible, so we need reduce its intrusiveness, make it as comfortable and effective as possible to use,” Priddy said. “Tech Warrior OPS is helping us to do that.”

Technology analysts from the Air Force SBIR/STTR Commercialization Readiness Program attended Tech Warrior OPS to assist companies in finding additional opportunities to meet warfighter needs while a technology scout from U.S. Central Command was also at the event and identified multiple technologies that may benefit warfighters from his organization.

Dayton, Ohio-based Battle Sight Technologies was among the business participating in Tech Warrior OPS. The company launched last year to license a patent for a chemical luminescence material developed by The Air Force Research Laboratory and plans to use it to manufacture a pressure-activated pen-like instrument. The instrument will be used for marking – distinguishing things such as landing sites or friendly forces – while being invisible to the enemy.

Battle Sight’s product, comparable to the size of sidewalk chalk, performs significantly better than the current glow sticks. By replacing glow sticks, which are only good for one use, it would eliminate the need to ship large pallets of products that weigh down a warfighters’ ruck sack.

Nicholas Ripplinger, president of Battle Sight, said feedback he received at Tech Warrior OPS led to a final packaging design for the initial product release. The service-disabled Veteran with seven years of Army service also made a connection to some promising funding options and future sales.

“Anytime you get to hang out with men and women in uniform to get your product evaluated, it’s a great experience,” Ripplinger said.

Other small business that participated in the recent Tech Warrior OPS event include:

In addition to Tech Warrior OPS, the newly expanded Tech Warrior Enterprise includes the annual Operation Tech Warrior exercise – sponsored by the Air Force Research Laboratory in the fall – and Tech Warrior CONNECT, which provides one-on-one assistance to small businesses throughout the year.

Any small businesses with an Air Force research and development contract, especially those involved in the Air Force SBIR/STTR Program, may request to participate in the Tech Warrior Enterprise by working with its government contact or by contacting twenterprise@wright.edu

Participation is Tech Warrior events is free for companies, which only pay for travel expenses.