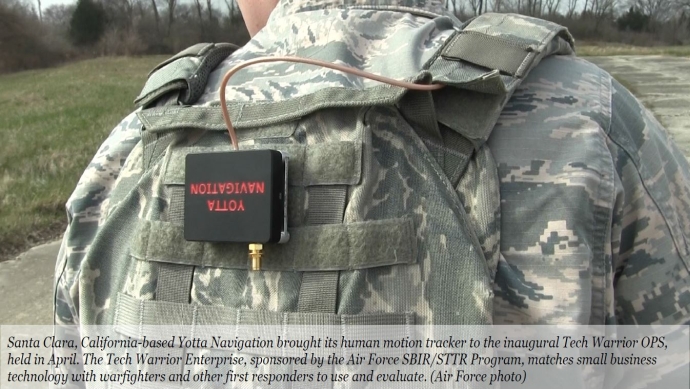 Increasingly complex battlefield exercises – which mix live and virtual elements – rely on precise tracking of warfighters. However, location capabilities have lagged significantly behind the training technology. A California-based small business recently took a big step towards bridging that gap by participating in a new technology acceleration event.

The tracker is a smaller device in a larger system, the Mobile Activity Tracking System. Also known as MATS, the system tracks operators during live exercises using a combination of GPS and other machine learning algorithms. MATS is designed to work when the warfighter enters GPS-challenged environments, such as tunnels or the interior of a building.

The company began work on MATS with support from an Air Force SBIR contract managed by the Airman Systems Directorate, a part of the 711th Human Performance Wing in Air Force Research Laboratory.

The newest and most innovative ground-based training happens in a live environment while a computer system is used to add virtual elements viewed by participants through special goggles. This has been difficult to implement because of a lack of long-range precision tracking capabilities. Perfecting a system such as MATS would facilitate improved training on a widespread scale and be a significant win for the Air Force as well as other services and combatant commands.

Tech Warrior OPS allowed Yotta Navigation to get an early version of the system into the hands of potential operators. Feedback from the event gave the company a better understanding of how its technology could be improved to compete in the next phase of the Air Force SBIR/STTR Program.

“Being out here (at the Tech Warrior event) helps a lot because, not only did we get to test this device in a more realistic environment, we got the opportunity to talk to real field operators, special operations forces and airmen who can give us feedback on the challenges they face, both in operations and in training exercises,” said Andrew Zaydak, senior engineer for Yotta Navigation. “For example, they needed a device that’s small, that is reliable, can interface with the rest of their kit without getting in the way, and basically, they can place it on and not worry about it.”

Participation is Tech Warrior events is free for companies, which only pay for travel and related expenses. Any small businesses with an Air Force research and development contract, especially those involved in the Air Force SBIR/STTR Program, may request to participate in the Tech Warrior Enterprise by working with its government contact or by contacting twenterprise@wright.edu.