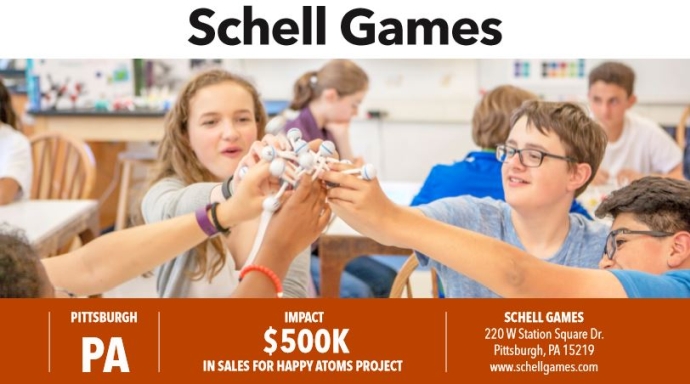 While atoms may be the building blocks of life, it is difficult for young children to understand the concept of molecular science. Long before starting his company, Jesse Schell wondered – what if there was a game that could show and teach kids how atoms worked? And better yet, what if it could let students create anything they wanted? Schell got to work on the software behind the idea, but quickly realized it needed a physical component. Schell then built a physical prototype he tested at local schools.

Students put the atoms together and optical recognition tools within the software would identify which molecules had been built, creating a sense of discovery in the children. But while the game was receiving praise, it still wasn’t a real product. Schell applied for a Department of Education SBIR grant and soon turned his idea into a business through funding provided by Phase I and Phase II programs. The technology, aptly named “Happy Atoms” is now being used in classrooms across the United States.

Schell Games partnered with Thames & Kosmos, a worldwide leader in chemistry kits, to produce and distribute the Happy Atoms product. Today, customers can buy either a large kit for $150, containing 50 pieces, or a smaller kit for $59, containing 17 pieces.

“Happy Atoms has been great for us because the SBIR grant helped us build the exact product we hoped for,” says Jesse Schell. “It allowed us to make a name for ourselves in the educational science space and to pursue other chemistry projects as well, including a virtual reality chemistry laboratory.”