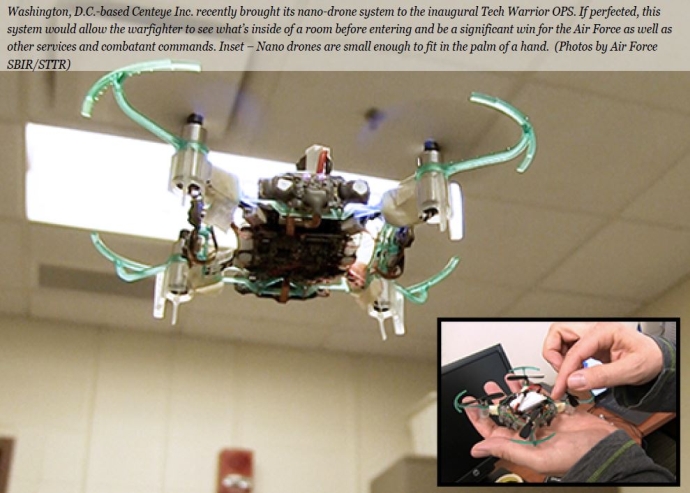 Tiny drones that can fly indoors – avoiding obstacles without the use of GPS – would provide a massive surveillance advantage to the warfighter. A Washington, D.C.-based small business recently took a step toward fielding that capability for the Air Force by participating in an event designed to accelerate technology development.

Centeye, which specializes in compact high-performance vision sensors, added its biologically-inspired technology to commercial off-the-shelf drones. The system relies on custom cameras and processing to sense and avoid obstacles, providing autonomy so the tiny drones can fly inside a structure without GPS and with little or no light available. Perfecting this system would allow the warfighter to see what’s inside of a room before entering and be a significant win for the Air Force as well as other services and combatant commands.

The company began work on the technology with support from SBIR contracts managed by the Air Force Research Laboratory and DARPA.

Tech Warrior OPS allowed Centeye to get an early version of the system into the hands of potential operators. Feedback from the event gave the company a better understanding of how its technology could be improved to compete in the next phase of the Air Force SBIR/STTR Program.

“There’s a saying in the military, ‘No battle plan survives first contact with the enemy,’ and it’s the same way for technology like this, no idea of how you think technology may be used survives first contact with harsh, brutal, but honest reality,” said Geoffrey Barrows, president of Centeye. “This is what I got here at Tech Warrior Ops. I learned there are things that are nice about the technology, and there are a lot of things that need improvement. Especially in the context of a more realistic scenario, or a more realistic site like this.”

In addition to surveillance for the warfighter, Barrows envisions commercial applications for the technology, such as inventory control in warehouses. The idea is that drones equipped with the sensors could see products stored in difficult to reach places.

Participation in Tech Warrior events is free for companies, which only pay for travel and related expenses. Any small businesses with an Air Force research and development contract, especially those involved in the Air Force SBIR/STTR Program, may request to participate in the Tech Warrior Enterprise by working with its government contact or by contacting twenterprise@wright.edu.