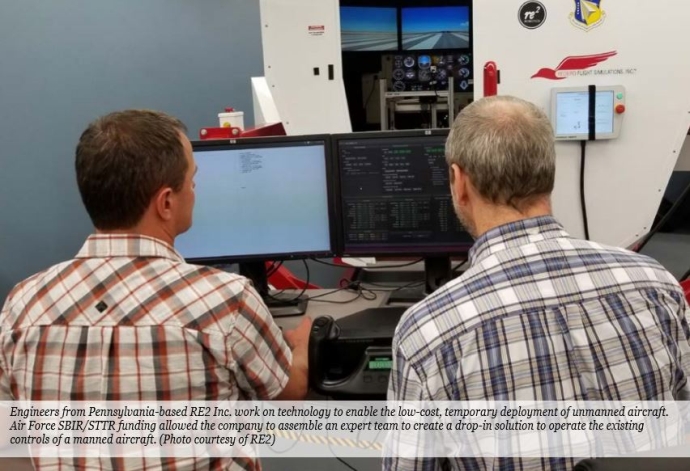 Air Force commanders will have greater flexibility to support the warfighter by quickly transforming conventional planes into unmanned systems – and back again – through a technology being developed with support from the Air Force Small Business Innovation Research/Small Business Technology Transfer Program.

Pennsylvania-based RE2 Inc. developed the Common Aircraft Retrofit for Novel Autonomous Control to enable the low-cost, temporary deployment of unmanned aircraft. This capability, known as CARNAC, could widely expand the tactics and strategies available in battlefield situations by replacing a seat in a normally manned aircraft’s cockpit with a robot.

For example, getting supplies to forward operating bases is a dangerous task requiring ground convoys or traditional aircraft passing through hostile territory. Being able to resupply those positions with an unmanned system, using relatively inexpensive aircraft adapted from existing fleets of military or civilian aircraft, would enhance our ability to support the warfighter without further endangering other troops or risking the loss of expensive, custom-built unmanned aircraft.

Under a special type of SBIR/STTR contract – known as a Direct-to-Phase II award, offered by the Air Force Research Laboratory Center for Rapid Innovation – RE2 Inc. is working to advance the system. The company recently demonstrated the technology in an FAA approved simulator and is assessing potential users across the Air Force and Department of Defense.

The development of CARNAC focused on creating a dropin solution to operate the existing controls of an aircraft. That led to a robotic “pilot” that could quickly be installed without making modifications to the aircraft, relying upon onboard power, or connecting to a fly-by-wire system. If successful, CARNAC would provide an affordable way to bypass the cost of developing a new airframe from scratch.

Taking advantage of the fact that existing aircraft are all designed around human pilots, RE2 replaced the pilot with a combination of off-the-shelf and custom mechanical and electronic hardware controlled by an autonomous system.

The system is programmed to follow standard flight rules and the aircraft’s operating handbook while completing a user-defined mission, all the way from takeoff to landing.

Through the use of robotic manipulation capabilities, dedicated custom actuation, vision-based flight-status recognition and cognitive architecture-based decision making, CARNAC interfaces with the same physical controls that a human pilot uses, including a cockpit’s rudder pedals and yoke. Dedicated actuators and a robotic arm that can mimic human dexterity manipulate controls and respond to standard on-board gauges.

A camera and range sensor are mounted to the robotic arm’s end effector, allowing the system to perceive and process the state of controls and make modifications when necessary.

Air Force SBIR/STTR funding for the project allowed RE2 to assemble an expert team in the areas of autonomous decision making, vision processing and manipulation then develop an approach to a drop-in kit that could flexibly adapt to different aircraft.

With feedback from the government, testing in a commercial motion simulator and continual development, CARNAC has progressed to a system capable of takeoff, normal flight, responding to emergencies and landing. It can be re-tasked during flight and a pilot can take over the controls and remotely operate the aircraft, if needed.

The CARNAC project has led to additional programs and research for RE2, which is also working to develop a similar robotic system for the Air Force to be used on the ground in existing construction vehicles. Those vehicles could then be used for clean-up after an airfield strike, reducing troop exposure to exploded ordinance.