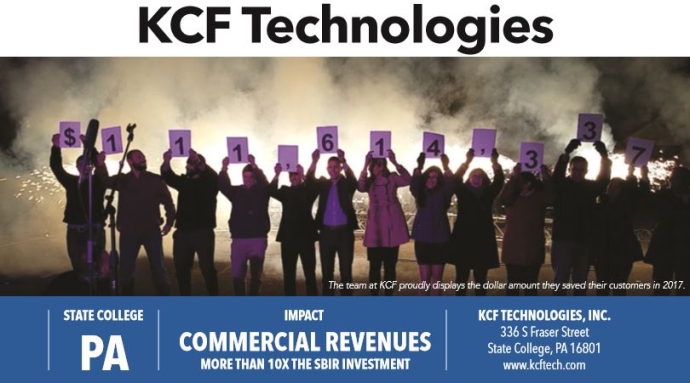 KCF wants to shout one thing from the rooftop: “We’re Hiring!” Jeremy Frank, President & Co-Founder of KCF Technologies, is excited the company is in a spot where it’s not only contributing to a booming local economy but also increasing its talent rapidly and optimizing American manufacturing.

“We’ve quadrupled our headcount and we’re actively seeking people to achieve our mission," explains Frank. “If I had to pinpoint the ideal candidate, I’d say Engineers with social skills.”

And that’s exactly where the team excels. KCF made a name for itself by being a leader in predictive maintenance on machinery. The company’s selfpowered wireless sensors, give machines a “voice” and allow users to set a maintenance schedule based on needs, not guesses. But no product sells itself, and the KCF team has worked hard to get these tools in front of workers who have manned the same machinery for 30 years and provide them with the information and support they need to make sense of the data.

The sensor system and related Sentry Services eliminate unnecessary waste as well as down time. Yes, there are cost savings, but users can also produce more of whatever they are making, whether it is paper or cars or oil. KCF’s clients have enjoyed a ten-fold increase in their ROI, and Frank has set a goal that his customers will see $250 million of measured total savings.

Frank and KCF remain huge fans of the SBIR program. “That magic multiple is 10,” explains Frank. “Twenty million in government contracts became $200 million in commercial business, and that became $2 billion in impact for American industry. The SBIR model works!”