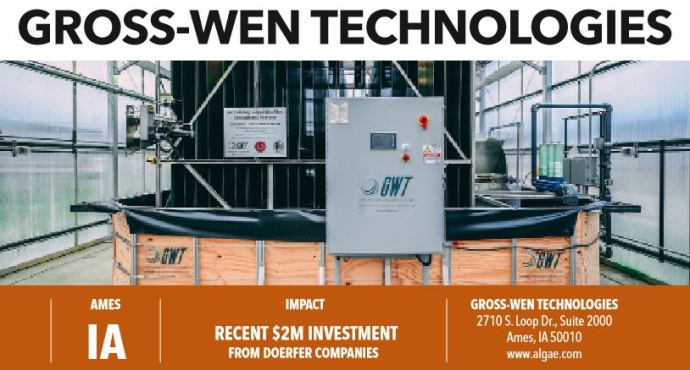 Reducing nitrogen and phosphorus in our rivers, lakes, and oceans has become a priority for this country. From killing the aquatic life and decimating the fishing industry, to creating a toxic ecosystem, these chemicals are a major issue in the United States, and around the world. The conventional technologies used in removing nitrogen and phosphorus from water involves using chemicals and bacteria – creating unwanted chemical or bacterial sludge that is a cost to dispose of. Gross-Wen’s solution not only works better, but it’s safe for the environment as well. The company utilized the USDA SBIR program to evolve its technology – an algae-based treatment that works with the water’s naturally occurring algae.

Gross-Wen takes the indigenous algae from the water and grows more of it. These algae then eat the carbon dioxide present in the atmosphere, and in turn produce an algae biomass that can be used to produce plastics, fertilizers and biofuel.

“We’re cleaning the air, cleaning the water, and were producing a new revenue stream with the products we’re making,” explains Dr. Martin Gross, President and Founder of Gross-Wen Technologies.“ The beauty of it all is that we are not only removing nitrogen and phosphorus but we are recovering it and we’re re-using it.”

The technology, called RAB (short for revolving algal biofilm system), was developed during Gross’ Ph.D. work at Iowa State University. SBIR funding allowed it to transition from an academic project to an actual business. RAB recently caught the attention of MWRD Chicago – the largest water treatment district in the U.S., and the two entities are working to roll the technology out on its largest scale yet.