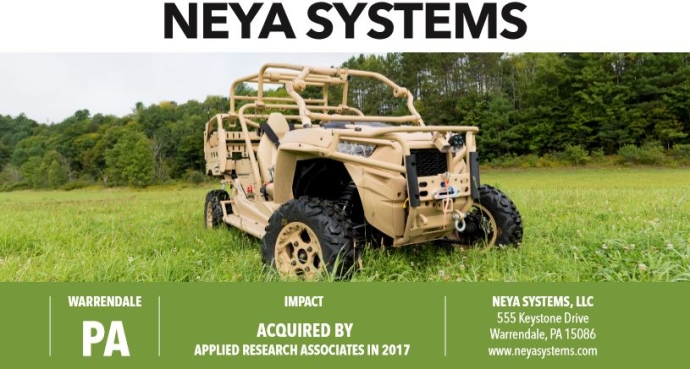 U.S. Forces are increasingly relying on robotics and autonomous systems, but they still require a high level of human interaction to control. When the Department of Defense expressed a need for robots to have higher levels of autonomy, Neya Systems came to the table with a solution by leveraging an Army SBIR award. Eight years later, Neya Systems is a wholly owned subsidiary of Applied Research Associates (ARA), and is still using funding from the SBIR program to deliver advanced solutions to a wide array of DoD and commercial clients.

Neya Systems was contracted under a TARDEC Phase II SBIR to develop mission planning and management capabilities to translate soldier’s intent to robot action. One of the facets of this contract includes encoding missions for robot execution. For instance, while soldiers in the battlefield can take high level orders such as “clear this area,” robots in the battlefield can only understand direct controls. To meet this need for autonomy, Neya has developed a domain specific language which encodes tactical and mission-level plans and behaviors so that fielded military robots can be given the same mission data to which soldiers are privy. Neya received Fast Track matching funding from OSD for this effort.

In one of the company’s most recent projects, Neya and ARA have teamed up with Polaris Industries Inc. to provide the U.S. Army with an elite platform for the Squad Multipurpose Equipment Transport (SMET) program. The modular MRZR® X is a preferred platform among infantry units in the U.S. and more than 25 allied countries. Team Polaris has been selected for Phase II of SMET, and this project will help evolve the system’s off-road robotics and autonomy capabilities, as well as make its integration and the transition from manned to unmanned vehicles easier for the Army and the soldier.