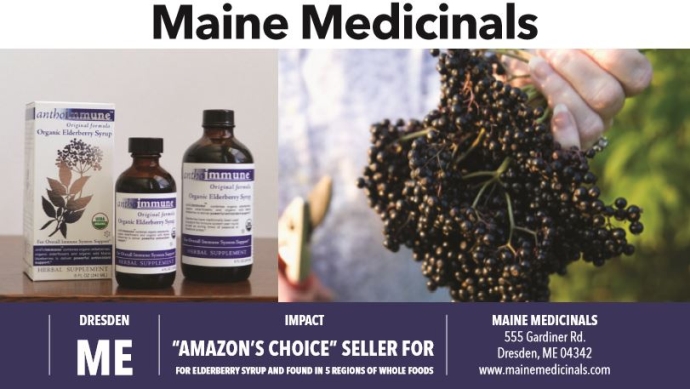 When you think of organic supplements, like Maine Medicinals’ tried and true Elderberry Syrup, it’s easy to envision the company’s following. Healthconscious Whole Foods shoppers, or immunity conscious parents who want to protect their families from the barrage of viruses floating around. But what you probably don’t envision is the U.S. Army, turning to nature, and to Maine Medicinals, in order to protect its troops with one of the most potent antioxidants available. Currently, the company is in development of a super concentrated blend of its flagship product through an Army SBIR project, with the goal of support soldiers’ immune systems, and offering quicker recovery from exertion.

After being in business for almost a decade, owner Edie Johnston and her son, Geo Johnston are experiencing a surge of growth that can be traced back to early USDA SBIR grants. Not only did the SBIR grants help Edie develop a proprietary process for the extraction of elderberries, but it afforded them the research and development that was necessary to learn about this relatively new crop in the United States. Thanks to the early grant money, Maine Medicinals’ process maintains significantly higher levels of phytonutrients, and the result is a product with two and a half times the antioxidants of its leading competitors’ products.

Maine Medicinals’ AnthoImmune™ Organic Elderberry Syrup is its most popular product, and unlike other elderberry elixirs, it actually tastes good. Edie has perfected a blend of organic wild Maine blueberries for added antioxidants, organic elderflowers (which are highly anti-inflammatory), and organic elderberries to create this top-selling brand. Although Maine Medicinals remains a small business employing just eight people, the company is gearing up for massive large-scale production.