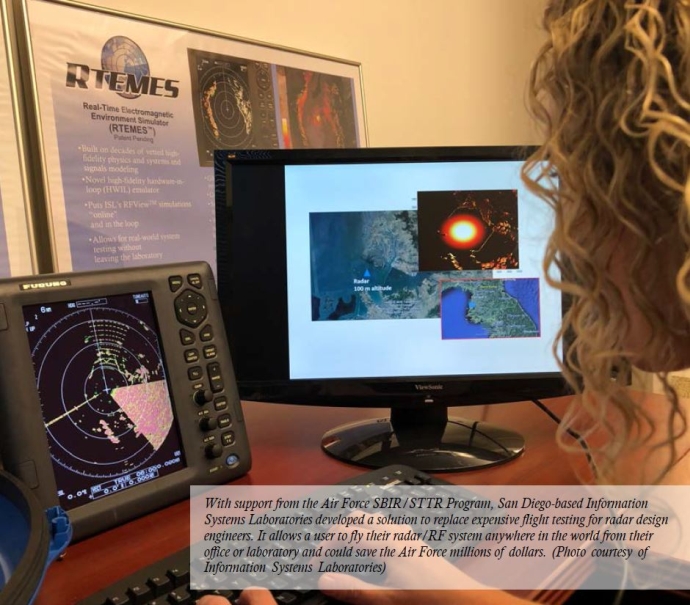 The Air Force is poised to save millions of dollars on the new radar systems it delivers to the warfighter.

The technology meets the needs of all military commands and services that rely on advanced radar modeling, testing and training, so it has the potential for widespread adoption across the Department of Defense. Information Systems Laboratories has already earned Phase III contracts, which denote funding from outside the Air Force SBIR/ STTR Program and indicate a critical commercialization benchmark.

Additionally, commercial variations of the system are now available and beginning to be sold.

Advanced radar flight tests that mimic conditions in highlycontested environments are some of the most expensive flight tests to conduct, costing the Air Force millions of dollars annually. This SBIR/STTR project was intended to model complex radar systems operating in those conditions.

Throughout the development process, the company took a new approach to high-fidelity radar/RF modeling which includes high-performance embedded computing. The idea is that design engineers and operators would be able to realistically conduct countless virtual sorties from a secure location while capturing all of the real-world effects a radar is likely to encounter.

That product allows a user to fly their radar/RF system anywhere in the world from their office or laboratory, according to Joseph Guerci, president and CEO of Information Systems Laboratories.

Through RFView, users enter the simulation parameters then submit a job that runs remotely on a high-performance computer cluster to ensure timely simulation results. No special computing software or hardware is required. A sister product, RTEMES, allows for real-time hardware-in-the-loop operation of RFView with the actual flight hardware.

In addition to its newer Phase III contract, the company is working closely with AFRL on another technology transition. Commercial sales of RFView and RTEMES are now having a bigger impact on Information Systems Laboratories than any other product in the company’s history.

Information Systems Laboratories had approximately 60 employees at the start of this project and Guerci expects that number to more than triple within two years because of its success.

“SBIR funding was critical to take our nascent RFView technology to the next level of maturation and commercialization while simultaneously producing a gamechanging new capability for the Air Force and Department of Defense,” he said.

Guerci Consulting won the original Air Force SBIR/STTR contract for the project and merged with Information Systems Laboratories in 2015.