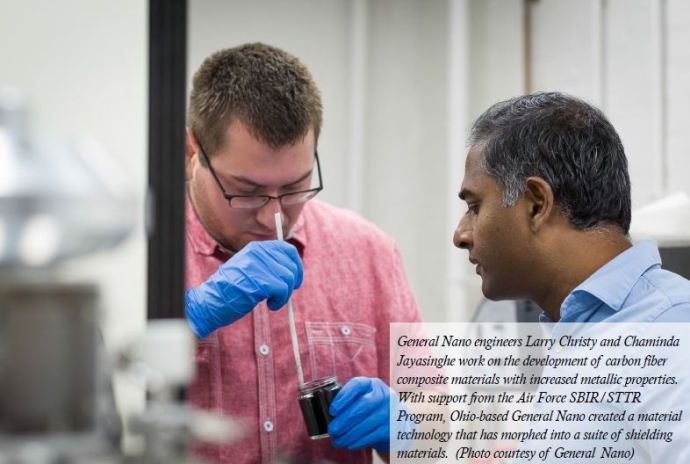 An Ohio company leveraged Air Force resources to create a new class of advanced materials that attracted millions of dollars in private sector capital as well as investment from the aerospace industry for more widespread adoption.

Throughout the project, General Nano worked with the Air Force Research Laboratory’s Materials and Manufacturing Directorate and used additional support from the Air Force SBIR/STTR Commercialization Readiness Program to partner with The Boeing Co. This partnership helped convert the early-stage materials technology into scalable systems, which are now in various stages of evaluation for aerospace production.

As a result, General Nano is quadrupling the size of its manufacturing facility, investing in new capital equipment and creating jobs.  According to the company, sales in the most recent fiscal year increased five-fold over the previous year and its employee roster is expected to triple, to more than 20 people, within 18 months.

This represents a critical commercialization benchmark of the Air Force SBIR/STTR Program.

When aircraft were primarily metallic, shielding wasn’t an issue. However, that changed as newer aircraft and airborne platforms were increasingly made with carbon fiber composites.

Although carbon fiber is electrically conductive, the resulting carbon fiber reinforced polymer composite is not nearly as conductive as metals. That presents significant issues when meeting electromagnetic effects requirements, such as shielding against electromagnetic interference, lightning strike protection and survivability.

General Nano’s materials are designed to replace legacy materials that provide adequate shielding, but carry a significant weight penalty. This would provide an immediate cost savings through reduced fuel usage and drive down the long-term life cycle costs to operate aircraft programs.

What once was a singular material technology has morphed into a suite of shielding materials that offers significant benefits. Boeing became involved because it sees this as a viable lighter weight alternative for lightning strike protection, which speaks to the potential utility of the new technology.

“The utility of the material for electromagnetic interference protection is also based on the fact that General Nano is able to grow long carbon nanotubes and then to use scalable paper making processes to create light-weight veils of CNTs with lower aerial density than other manufacturers,” said Jeff Baur, a principal engineer with AFRL’s Materials and Manufacturing Directorate.

If successful, the new composite technology would reduce weight on each aircraft and could save millions of dollars in fuel costs over the life of each platform. It would also provide the Air Force with aircraft that have increased range, increased payload capacity, longer lifetimes and reduced manufacturing costs.

AFRL’s Materials and Manufacturing Directorate helped to identify the dual military-commercial applications, to connect General Nano with organizations that could assist in scaling-up production, and to consider alternative Air Force applications for such a material.

Funding from the Air Force SBIR/STTR Program allowed General Nano to advance the materials from lab-scale batch manufacturing to continuous production. This convinced prime contractors to fund research and development programs to further evaluate the materials.

Additional development led to an even higher level of shielding performance than what was previously available.

In April 2016, Boeing presented General Nano its ‘Supplier of the Year for Technology’ award, a global accolade that went to only one company out of more than 14,000 Boeing suppliers worldwide.