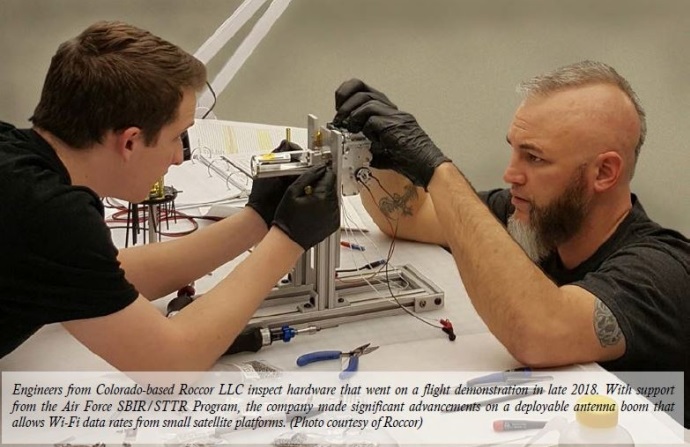 A fledgling technology could help the Air Force eliminate the need for theaterspecific airborne communication platforms.

With support from the Air Force Small Business Innovation Research/Small Business Technology Transfer Program, Colorado-based Roccor LLC made significant advancements on a deployable antenna boom that allows Wi-Fi data rates from small satellite platforms. Until now, such broadband communications have only been possible on larger satellites.

Also known as the ROC Boom, the company’s technology capitalizes on the affordability of increasingly popular SmallSats. It was originally created by Roccor under the NASA SBIR/STTR Program.

More recently, the Air Force SBIR/STTR Commercialization Readiness Program and the Air Force Research Laboratory Space Vehicles Directorate provided Roccor with resources and technical support to adapt the technology for Air Force use. That allowed Roccor to develop a high strain composite boom for a first-generation SmallSat antenna system under parallel development by a prime contractor for an Air Force customer.

High strain composite deployment systems have grown from laboratory experiments to mission-critical components on satellite constellations in slightly more than a decade. The deployable structures are incredibly simple, with very few parts.

The latest-generation high strain composite laminates accommodate high-packaging strains while having a near zero coefficient of thermal expansion. In other words, they remain stable after deployment while supporting high-compression loads and tensioning of critical antenna elements.

The technology is a significant step toward meeting the challenge of designing high-performance, low-cost deployable antennas for SmallSats. ROC Boom, for example, provides flexibility to stow on a SmallSat, but stays rigid after deployment and functionally integrates with the antenna system.

This provides the ability to deploy a large aperture, Ka-band antenna from a SmallSat.

Ka is the highest frequency, broadest bandwidth communications frequency used on current satellites.  However, as it is more difficult to engineer than lowerband antennas commonly used for less data-intensive applications, the technology has not been deployed on a SmallSat platform until now.

SBIR SUPPORT MADE THE DIFFERENCE

The performance of high strain polymer matrix composites after long-term storage is among the greatest concerns of antenna system engineers.

Roccor’s boom technology helped the company secure approximately $5 million in research and development contracts for a number of commercial and government customers.  The ROC Boom is one element of an expanding portfolio of high-strain composite deployment systems under development at Roccor that helped spark growth to 35 employees and $10 million in revenue this year, compared to six employees and $1 million in sales in 2014.

Company officials expect another surge in revenue and hiring by 2020 with wider acceptance and commercialization of its high strain composite boom technology.