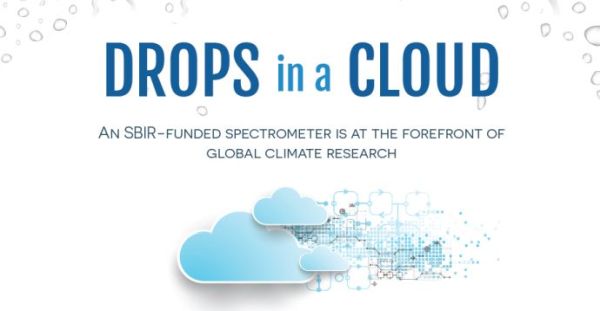 Weeks before the athletes took to the ice and snow at the 2018 Winter Olympics in South Korea, Dr. Duncan Axisa was in the mountains around PyeongChang, studying ice-forming particles. Later in the year, Axisa traveled to India to study monsoon clouds, and to France to participate in a trans-national ice-nucleation experiment. Axisa and his team travel around the globe to help scientists better predict the weather—specifically precipitation. Precipitation prediction is a difficult science, made more complicated by the varied composition of clouds, which affect their propensity to drop rain, ice or snow. But Axisa and his team had an advantage: a specialized, SBIR-funded instrument that can accurately measure not only the size of particles within a cloud but their shapes (important for discriminating between water and ice), as well as water content and atmospheric pressure and temperature.

Named CAPS (Cloud, Aerosol and Precipitation Spectrometer), the measurement device was developed in 1996 by Longmont, Colorado-based Droplet Measurement Technologies, LLC. (Droplet), with help from an SBIR contract from the Office of Naval Research. More than 20 years and several iterations later, the tool has become an industry standard, used in everything from climate change research to private sector studies on weather applications around the globe.

A few measurement campaigns later, Axisa, currently Droplet’s Director of Science Programs, and his team had all the data they needed. Their findings helped scientists and meteorologists better predict precipitation and high impact weather. Axisa said the work they did with the CAPS globally demonstrated the power, versatility and ease-of-use of the instrument.

If anyone knows about particles and aerosols, it’s Axisa. He received his PhD in aerosol physics from the University of Denver, and, before joining Droplet, spent a decade with the National Center for Atmospheric Research (NCAR), based in Boulder, Colorado, where he helped various institutions (NASA, private industry and university groups among them) deploy research aircraft to study aerosol, clouds and precipitation. But his primary area of study is the potential impact of aerosols and clouds on climate change. While scientists have a strong understanding, based on years of research, of many of the various mechanisms of climate change, one question that until recently remained largely unanswered was exactly how particles affect the climate.

“It is still a hugely debated scientific question whether aerosol impacted clouds have a net positive warming effect on climate or a cooling effect,” Axisa said. “This question contributes to the largest uncertainty of our understanding of climate change.”

While substances such as chlorofluorocarbons (CFC) have long been known to cause damage to the ozone layer in the earth’s upper atmosphere, other types of aerosols have not been as extensively studied. Moreover, research into seemingly more benign particles, such as dust or salt, has also been limited.

In the past few years, according to Axisa, that has all changed. Part of the shift can be attributed to the growth of climate change as a field of study, he said. But part of it is to do with the development of new equipment that can help scientists collect data more quickly, accurately, and easily.

The CAPS instrument — a forearm-size tube of sensors and monitors that attaches to research aircraft—had been around for a decade by the time Axisa began working at NCAR in 2007, and he was well aware of the system. But it wasn’t until his work with the federally funded center that he began to use the system consistently. Over the course of several years, he took CAPS around the world, studying how airborne aerosols, pollution particles, dust and salt interact with clouds and modify precipitation. While the version of the instrument Axisa used at NCAR didn’t necessarily break ground in terms of new technologies, what it did well was combine a plethora of existing measurement devices into a single, easy-to-use Swiss army knife.

“The thing that was novel about CAPS was that it was a combination probe,” Axisa said. “It had a part of the instrument that measured aerosol, especially in the large end of the size distribution where they are efficient at forming droplets, as well as the distribution of the cloud particles themselves. And then it was also capable of measuring the formation of precipitation both in the liquid phase and also the first formation of ice. All these components were important.”

As someone who had spent time doing similar research by stitching together data from a variety of instruments, having one piece of equipment and software helped streamline the entire process, he added.

“It’s more practical to deploy in the field when you’re not relying on multiple instruments but rather having just one to worry about,” Axisa said. “With CAPS’s practicality and ease of use you start to introduce the instrument to more platforms and more aircraft, which leads to more data and analysis.”

By the time Axisa moved from NCAR to Droplet in 2017, the CAPS instrument was standard for any organization researching airborne particles.

“The CAPS has been a workhorse for the Department of Energy Atmospheric Radiation Measurement (ARM) Aerial Facility (AAF),” said Dr. Jason Tomlinson, director of engineering for the facility. “The instrument has been flown on every research mission for over a decade. The measurements from the CAPS have contributed immensely to the advancement of the understanding of the aerosols and clouds in the earth’s atmosphere. And have been included in numerous high impact publications. The success story of the AAF is tied directly to this instrument.”

And both the technology itself, as well as its reach, continue to grow. Founded in 1987 by Darrel Baumgard¬ner, Bill Dawson, and Craig Walter, Droplet’s original purpose was to service airborne probes. But following its first SBIR for the CAPS, and several subsequent contracts, the company has emerged as the industry leader in cloud particle spectrometers and beyond, featuring in the work of Boeing and Bombardier, as well as government agencies, universities, and international research orga¬nizations. Droplet has been recently acquired by a Chi¬cago based investment group, Benford Capital Partners, LLC, a company that sees much potential in Droplet’s ability to be innovative in developing new instrumentation. Droplet’s President and CEO Dr. Jeff Throckmorton said that “innovation is the lifeblood of Droplet and partnering with organizations like the Office of Naval Research via the SBIR program to develop impactful technology has been and will continue to be a key component of Droplet’s innovation and new product development strategy.”

The newest version of CAPS includes state-of-the-art polarization detection, which can measure whether particles are spherical or not—important for determining whether or not ice has formed within a cloud. Recently, scientists in China and Southeast Asia began using the instrument, as well as in India, where they have begun to study how pollution is affecting the annual monsoon rains. These types of studies, and those on climate change, are critical to the future of the planet and are fueled by equipment like CAPS, Axisa said.

“Having been on the science side, I understand the need to have instruments like CAPS in order for scientists to make the discoveries,” he said. “To study the physics, such as how particles—from pollution sources and from the power plants and the megacities, from forest fires, even natural emissions—impact clouds, you need to build the instrument that measures that.

“Small companies can tinker and come up with a concept for a tool like that,” he continued. “A shortage of capital can really hinder the capability of these companies to develop instruments, but that’s where the SBIR comes in, as something to jump-start that process.”

And it’s not just the instruments that are built from the SBIR funding, Axisa said. There’s a human side to the program, too. “People grow through the program and can achieve their goals,” he said. “It has certainly made me a better scientist and allowed me to continue to make discoveries that I wouldn’t have otherwise.”