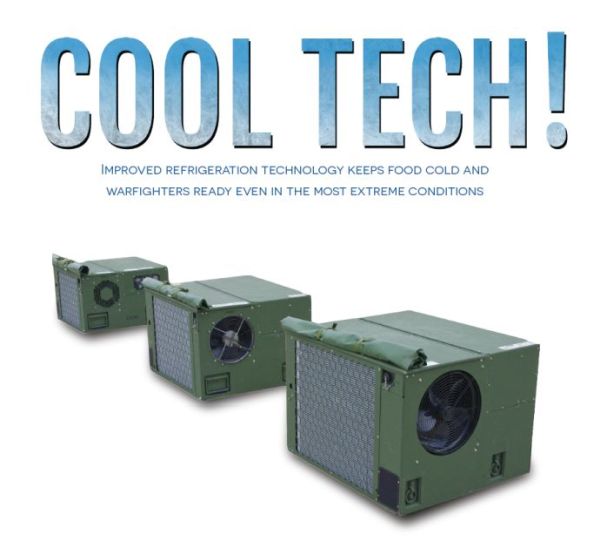 Stationing hungry soldiers in an Iraqi desert where temperatures can exceed 130 degrees Fahrenheit presents obvious logistical challenges. Refrigerating food is necessary but difficult, especially in remote locations. It’s also expensive and potentially dangerous to transport fuel to power the refrigeration. And if the cooling system fails or falters, rations can rot, compromising the warfighter’s mission.

All of those considerations were at the heart of a military effort to develop more efficient and cost-effective refrigeration technology, an undertaking led by the U.S. Army Natick Soldier Research, Development and Engineering Center in Natick, Massachusetts, now called the Combat Capabilities Development Command (CCDC) Soldier Center. The CCDC, a major subordinate command of the Army Futures Command, is the Army’s largest technology developer.
In 2004, the Department of Defense (DoD) issued a Small Business Innovation Research (SBIR) topic to develop improved refrigeration technology. The initial goal was to see refrigeration powered by solar energy, but the broader ambition was for greater efficiency. Florida-based Mainstream Engineering emerged from a pool of candidates to secure the contract.

Dr. Robert Scaringe, founder and president of Mainstream Engineering, said the DoD’s existing refrigeration systems met only about 80 percent of the military’s requirements when his company came onboard.

“We saw a perfect opportunity here to see if we could develop this thing, see if we could get it to work, and get it rugged enough and better performing than the existing 80 percent,” Scaring said.

That’s where the SBIR program came in.

A project officer with the CCDC Soldier Center who oversaw the early phases of the SBIR project said the military has long used various insulated refrigerated containers. But the “fully burdened cost of fuel” to power refrigerated containers in a theater of war (or elsewhere) has a multiplier effect when accounting for transportation and other factors. Flying in fuel has a high price tag, while driving it in by truck creates wear and tear on vehicles, and there’s labor involved.

“In the worst cases, through hostile territory, you have to protect from being shot at,” the project officer said. “That has a cost in not only dollars but soldier lives.”

When the project officer wrote his descriptions for the proposed technology upgrades, he focused on frequent areas of operations in the Middle East and Afghanistan, which have some of the highest temperatures in the world.
“We wanted to develop a refrigeration technology that was not only more efficient but also used less fuel, less electricity,” he said.

For Scaringe and his team, the SBIR contract was not an end-all funding source but it sufficiently greased the wheels. It ultimately helped them manufacture a product that not only had military applications but was also commercially viable.

The International Organization for Standardization sets global proprietary, industrial, and commercial standards, including specifications for intermodal containers, meaning containers that travel by road, rail, sea and air. Every major port in the world uses the same type of equipment to grab and move these containers. The most common sizes are 20 feet and 40 feet long. Under 20 feet, they are sized down in proportional fractions. Bicons are 10 feet long, tricons are 6.6 feet and quadcons are 5 feet.

One product that emerged from the initial SBIR contract, Mainstream Engineering’s Modulated Refrigeration Unit (MRU), can be rigidly attached to either tricon or quadcon insulated containers. It provides thermal control to the insulated containers in ambient temperatures as high as 130 degrees Fahrenheit and as low as negative 40 degrees Fahrenheit.

The other product that resulted from the contract is Mainstream’s TriCon Refrigerated Container System (TRCS), which it says is the official TRCS used by the U.S. Armed Forces. It contains the company’s MRU, is powered by external energy sources, and both stores and transports temperature-sensitive cargo.

Ultimately, and while the military ended up most typically powering the final refrigeration units through generators or electricity sources, Scaringe said the units are solar capable and, no matter the power source, energy-efficient.
In addition to the military benefit, Scaringe said the technology’s commercial applications are far-ranging, including use at remote telecommunications stations, industrial locations in rugged settings, and blast shelters at oil-drilling wells. “In a bigger picture sense, the technology can be used anywhere where cooling is necessary and it’s a harsh environment,” he said.

Scaringe, who has a Ph.D. in mechanical engineering and a background in energy conversion and thermal control, credits the SBIR program with paving the way for his transition from academia to Mainstream Engineering. While teaching at the Florida Institute of Technology, Scaringe said he took a leave of absence to write two SBIR proposals. “They both hit,” he said. “I left the school and started Mainstream.”

And now, years later, the technologies developed by Mainstream Engineering continue to benefit. “We don’t look at it like the government is paying us to develop a product,” he said. “You’ve got to carry the ball. The government is just helping. Every one of our programs is a spinoff of the SBIR program.”

The CCDC Soldier Center project officer said the SBIR program is useful on multiple fronts. For one, it promotes technology development for small businesses that don’t have the resources to pursue government funding. “If you’re able to set aside funding specifically for small businesses, that keeps the big businesses out of the pool,” he said.

The SBIR program also divvies out “a lot of little chunks of money to small businesses instead of huge chunks of money to big companies.” That creates an enormous pool of applicants applying to develop a vast array of different technologies, which he said is important in the research field, where only a percentage of concepts work out.

“In the end, you’re having thousands and thousands of technologies in development,” he said.

Another bonus, the officer said, is that small businesses can be very nimble. “That’s why I really appreciate the SBIR program,” he said.