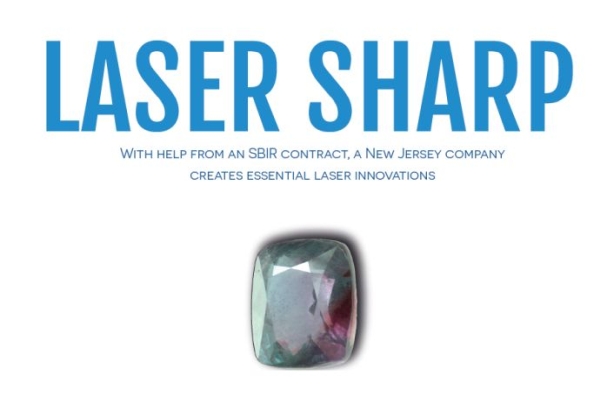 Thanks to a series of U.S. Air Force SBIR contracts, laser technology from the turn of the century, originally designed to monitor the upper atmosphere for nuclear detonations, is now being used for everything from astrophysics research to computer chip manufacture to tattoo removal.

The story of the solid state laser technology refined by Light Age, Inc. spans three decades, with stops in outer space and the inner workings of the human mind. And government funding through the SBIR program and other initiatives was a key to unlocking the technology, said Dr. Donald F. Heller, CEO of the privately held New Jersey company.

“This is why the SBIR and other government funding programs for research are so important,” he said. “This work will keep paying dividends into the indefinite future.”

Light Age’s founders, who started the company in 1986 after leaving what is today Honeywell, licensed new laser technology developed during their time at the company. The basic concept: a more broadly tunable, solid-state laser system which could be used across a wide range of wavelengths even while consuming less power.

What made that ability to shift wavelengths possible was alexandrite, a rare but naturally occurring mineral first discovered in the Ural Mountains of Russia in the 1830s. As a gemstone, alexandrite is famed for its color-changing abilities under different kinds of light, and as a result its crystals provide greater turnability than the rubies used in many lasers.

Light Age’s initial focus was on scientific and academic uses, including spectroscopy, which measures the interaction of light to determine the composition of different materials and how molecules interact with each other. The technology was also adopted for use in LIDAR, a laser-based remote sensing method similar to radar which uses light waves instead of sound to measure the upper atmosphere.

In 1991, Light Age was part of the first cohort of Advanced Technology Program (ATP) contracts, created in 1991 by the Bush Administration and administered by the National Institute of Standards and Technology (NIST) in order to encourage research and development with the potential to boost American competitiveness.

“Throughout our history, Light Age has never marketed to government directly,” Heller said. “The government has come to us.”

In 1997, Light Age won the first of several Small Business Innovation Research (SBIR) contracts from MDA to continue refining its laser technology. Funding from the SBIR program helped the company improve a system capable of generating laser light in both the deep ultraviolet and middle-infrared ranges—the invisible wavelengths at the opposite ends of the visible light spectrum.

SBIR funding “enabled improvements in all of the fundamental laser technology for developing tunable means for generating light at all wavelengths,” Heller said. “We can make lasers capable of doing anything light can do—any wavelength, any temporal spatial energy distribution at almost any power.”

Following the completion of Light Age’s SBIR contracts in 2001, IBM approached the company to see if its technology could be used to develop a deep ultraviolet laser system that could essentially etch circuits onto silicon, allowing for smaller, denser, and more powerful chips. According to Heller, IBM had just ended an unsuccessful venture with a company that had failed to create a viable laser for the process.

Five years later, IBM unveiled a high-resolution photolithography system based in part on Light Age’s technology. Called NEMO, the system demonstrated that it was technically possible to etch features smaller than 30 nanometers onto silicon chips—3,000 times smaller than a human hair and three times smaller than what was typical at the time.

The breakthrough gave chipmakers “seven years of breathing room before any radical changes in chip-making techniques would be needed,” an IBM scientist said at the time. True to IBM’s word, newer chip-creation technologies have since supplanted NEMO, but virtually every embedded processor used in today’s cellphones, laptops, and other systems is based on integrated circuit chips—some with features now approaching 10 nanometers or smaller—that draw from the immersion photolithography techniques pioneered by Light Age’s laser technology. One estimate has put the overall economic impact of the manufacturing break-through at more than $1 trillion.

Over the past decade, Light Age has primarily focused on refining its laser technology in the middle-infrared part of the spectrum, where it has the greatest potential for scientific and medical applications.

Today, most of the company’s revenues come from medical systems, including its own dermatology products used in hair and tattoo removal. At the same time, Light Age also makes advanced spectroscopy systems used for basic science in universities and national labs around the world. In 2003, the company moved to a 40,000 square-foot research and manufacturing facility in Somerset, New Jersey. It has a customer base of several thousand organizations, ranging from large manufacturers and startups to universities and international research organizations.

Light Age is also collaborating with university, corporate, and government partners on next-generation medical systems, including work with Vanderbilt University on developing tools for precision neurosurgery, a laser solution for certain types of vision loss now being commercialized, and research funded from the National Institutes of Health (NIH) and Department of Defense (DoD) to develop next-generation, advanced imaging systems for soft tissue.

“We have enormous capabilities here—there are only a few things we can’t pursue,” Heller said. Like most small businesses, Light Age is undercapitalized, according to Heller, and government programs like SBIR have helped the company “support research and development” over the past three decades.

“Getting something off the ground always requires time and money,” Heller said. “That is what happens when new basic capabilities are developed, and this work needs to be supported.”