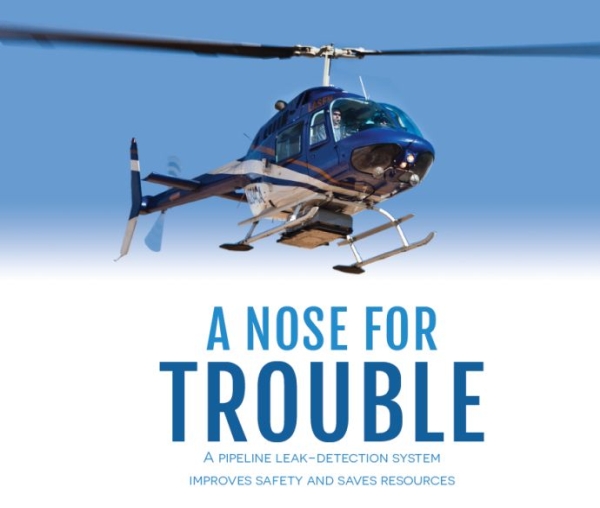 On August 19, 2000, internal corrosion caused a 30-inch-diameter pipeline, buried six feet underground near the Pecos River in New Mexico, to rupture. Escaping gas exploded, leaving a 20-foot-deep crater and killing 12 people camped 600 feet away. On September 9, 2010, a gas pipeline running through San Bruno, California, exploded in flames, incinerating 38 homes and damaging 120 others. Eight people were killed and 58 injured. These are far from isolated incidents. The federal Office of Pipeline Safety reports that between 1986 and 2016, pipeline accidents in the U.S. have resulted in 548 deaths, 2,576 injuries, and over $8.5 billion in financial damages.

Ensuring pipeline integrity is a matter of safety, but faulty pipelines are also significant sources of wasted resources and contributors to greenhouse gases. Millions of miles of oil and gas pipeline snake across the nation, with much of that infrastructure built 30 to 50 years ago. Corroding pipes and small leaks in aging pipe are often the precursor to major leaks. Industry sources estimate that it would cost approximately $4 trillion to replace all the old pipelines in the U.S., at about $1 million per mile. But even newly installed pipelines are not without their problems. Since it began operating in 2010, to take only one example, the Keystone pipeline has leaked some 9,700 barrels (407,400 gallons) of oil.

Conventional pipeline inspection is slow and costly, with workers driving or walking pipeline routes at a pace of about four to five miles a day, often in isolated, hard to access areas. Traditional inspection uses ground-based detection equipment such as handheld methane leak detectors, and relies on global navigation satellite systems, mobile communications, and on-site data transfer technologies for mapping and reporting.

In 1989, LaSen, Inc., a four-person firm based in New Mexico, began developing and building remote leak detection systems, based on sensing chemical signatures using laser light. With their new LIDAR (Light Detection and Ranging) system for chemical detection, they attracted interest from the Defense Department, resulting in their first Small Business Innovation Research (SBIR) award from the Air Force in 1995. In 2002, while delivering and demonstrating a system to Wright-Patterson Air Force Base, the U.S. Department of Transportation Pipeline and Hazardous Materials Safety Administration (PHMSA) opened discussions with LaSen to develop a system that could be mounted on aircraft. LaSen was awarded a follow-on SBIR contract from the Defense Advanced Research Projects Agency (DARPA) in 2003 to fully develop smaller, lighter airborne sensors. By November 2004, LaSen had successfully demonstrated a lidar technology to detect methane leaks from 300 to 500 feet in the air.

LaSen’s system had its commercial debut in 2005, and the company has since flown its helicopter-mounted Airborne Lidar Pipeline Inspection System (ALPIS) over 300,000 miles to detect nearly 40,000 leaks. ALPIS is based on a mid-infrared differential absorption lidar that utilizes the selective absorption of laser light by different chemicals. It is able to detect such hydrocarbons as methane, propane, butane, and volatilized liquid petroleum products, with the absorption signature used to locate the leak and assess its size. ALPIS can also map methane leaks from fracking and open well heads, a major source of greenhouse emissions, and the company is in the process of developing the capability to detect chemical threats and airborne biological agents.

Helicopters equipped with ALPIS can cover 50 to 300 miles per day, precisely locating leak indications to save resources and avoid disasters. Each indication is photographed, classified by size, tagged with GPS coordinates, and sent to the pipeline operator in a detailed overnight report. Planned emergency reporting is available in less than three hours.

Thanks to support from the SBIR program, the most advanced airborne aerial leak detection service on the market is now serving industry, making our nation safer even as it’s helping to protect the environment. From its start in 1989, LaSen has grown to employ 22 people. “We are committed to improving ALPIS each and every day,” said Rusty Jennett, president and CEO of LaSen.

Ralph Motto, LaSen director of technology, added, “I have no doubt we have saved lives and protected property from catastrophe.”