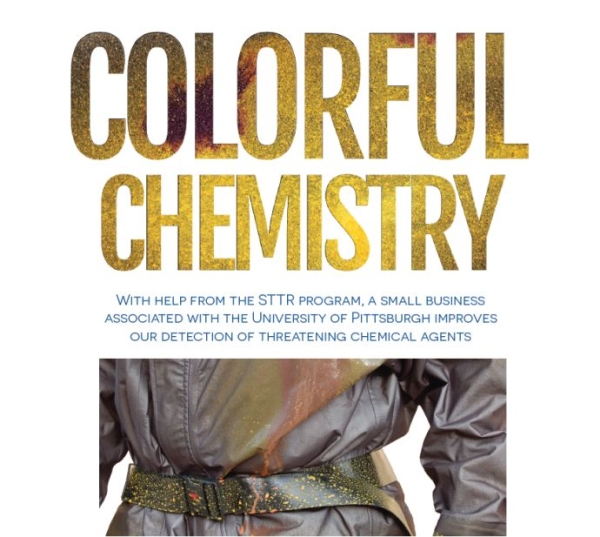 Chemical weapons have the capacity to inflict enormous loss of life on military and civilian populations. They can negatively impact economies, constrain national budgets, and create geopolitical imbalance. In order to mitigate these dreadful impacts, it is critical that chemical warfare agents be quickly detected and effectively contained.

Products for the detection of nerve, blood, and blister chemical agents range from simple units that use colorimetric techniques (wherein the presence of a chemical substance is indicated by a specific color change) to more complex systems that also use specialized equipment. Unfortunately, most colorimetric-based products (paper detection products or gas detection tubes, for instance) can be highly susceptible to chemical interference, sometimes resulting in false positive and false negative results. More sophisticated approaches can be less sensitive to chemical interference but also more expensive to buy and maintain, and require highly trained operators to properly use. Despite the range of chemical warfare agent detection systems, there are very few that combine high sensitivity, accuracy, and ease of use.

The U.S. Army Research Laboratory (ARL) commissioned a Small Business Technology Transfer (STTR) effort to address this critical national security challenge. Under the STTR program, Agentase, LLC, a small business spun out of the University of Pittsburgh, developed an accurate, sensitive, low cost, and easy to use detection capability for nerve, blood, and blister chemical agents. The underlying chemistry utilizes enzymes (complex proteins naturally produced by living organisms that act as a catalyst for specific biochemical reactions) to drive rapid, color-based reactions with chemical warfare agents. Once applied to a surface (in a liquid solution, for example), a vivid color change indicates the exact location of contamination by a specific chemical warfare agent.

The technology is highly sensitive and specific to target agents, providing accurate results on only trace amounts of material, even at concentrations below levels that represent an immediate danger to life and health. Its sensitivity also provides the ability to determine whether decontamination was effective. The rapid, color-based reaction makes the capability simple to employ, even by the untrained user. Because the underlying chemistry uses enzymes to drive specific biochemical reactions, the technology is highly resistant to potential forms of chemical and environmental interference that might be problematic for conventional detection equipment. And because enzymes are not consumed in the reactions, only a very small quantity of an enzyme is needed to catalyze a reaction. Overall, the technology provides for immediate and thorough decontamination, reducing the hazard to personnel and equipment and assisting in the restoration of operational mission capability, at a cost that is comparable to, or lower than, other available solutions.

The Defense Threat Reduction Agency (DTRA) is the DoD agency responsible for countering weapons of mass destruction. Like ARL, they recognized the potential for this technology. Building on the STTR, DTRA provided funding to continue development. This stage of effort provided the bridge between technology development under the STTR and capability delivery under an acquisition program office.

The Joint Program Executive Office for Chemical and Biological Defense (JPEO-CBD), the DoD entity that manages the nation’s investments in chemical, biological, radiological, and nuclear (CBRN) defense equipment, adopted the technology in the Domestic Response Capability (DRC) Kit. The DRC Kit packages the chemical components into a simple, pen-like construct, an easy-to-use “point-and-touch” detection as well as a spray-based formulation of the same technology. The DRC Kit also includes the Chemical Hazard Indicating and Ranging Pack (CHIRP), a real-time air monitoring capability using the same chemical detection technology but coupled with GPS and wireless communications that relays data to a central command center software package.

The STTR led to several commercial products now offered by FLIR Systems, Inc.—a leading security technology corporation in the Defense and Homeland Security markets. The Agentase Chemical Agent Detection (CAD) Kit offers the chemical detection capability in the pen-like form factor, and FLIR Systems has the spray-based formulation as Agentase C2 Chemical Agent Disclosure Spray (ADS). FLIR Systems also presents ADS in a handheld half-liter sprayer for spot checks, a backpack application for increased range of spraying, and a cart-based sprayer for screening over large areas, such as vehicles and terrain. FLIR Systems also offers training versions of these products. They’re identical in operation but use a non-toxic simulant to trigger a response.

FLIR has further expanded the technology to include the detection of toxic industrial chemicals. They’ve developed a real-time monitor that looks for contaminants in drinking water, and future commercial focus will be on the agricultural and food processing industries, supporting food quality through an emphasis on pesticide and other contaminant detection.

Thanks to the STTR program, Agentase was able to partner with Battelle Memorial Institute, a global science and technology research and development organization, to grow their enzyme-polymer biosensor technology into a mature chemical-sensing solution. In 2003, the technology won the Army’s Greatest Invention Award. By 2015, the advanced chemical warfare agent detection capability had been fielded throughout DoD, DHS, and the FBI. Domestic economic activity also resulted. Agentase’s initial successes under the STTR program led to their purchase by ICx Technologies in 2006. ICx was subsequently purchased by FLIR Systems in 2010 for $268 million.

Through the STTR program, a small business has changed our nation’s ability to respond to chemical attacks. Dr. Stephen Lee, chief scientist at ARL’s Army Research Office, fostered the first phases of the STTR with Agentase, and has been an advocate for the technology ever since, “Without STTR we’d never have the ability to field this capability, period,” he said.