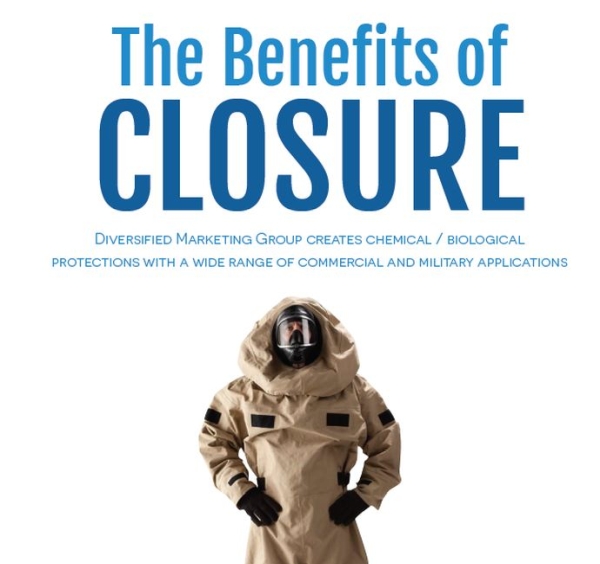 With a quick and satisfying ziiiipp, a U.S. Army soldier is carefully enclosed, dressed in a full protective suit in anticipation of entering a zone of chemical/biological (CB) warfare. He can breathe easier knowing his body is protected from harm by the high-tech materials and closures in the suit around him.

Thousands of miles away in the frigid North Sea, an oil rig worker is pulled to safety by a helicopter rescue team. Despite falling overboard the worker is warm and dry thanks to the Safety of Life at Sea (SOLAS) suit he is required to wear. His rescuers are equally protected from the freezing waves and spray in their SOLAS immersion suits.

“Individual and collective CB protection is only as effective and efficient as its closure,” read the 2003 Small Business Innovation Research (SBIR) request for proposals (RFP) from the U.S. Army. Through this RFP, the U.S. Army sought, “development of technology for a lightweight closure which provides complete protection from vapor and aerosol exposure and direct liquid” to enhance CBRN (chemical/biological/radioactive/nuclear) protective clothing and gear in light of the recent 9/11 attacks.

David M. Goodman, founder and owner of Diversified Marketing Group, Inc. (DMG), utilized his many decades of expertise in closure technology by assembling a consortium of experts (including YKK, the world’s largest zipper manufacturer, where Goodman had previously been employed) and developing a series of closures that would prove to not only satisfy the U.S. Army’s immediate needs but also lead to a multitude of other uses, both within the U.S. military and beyond. DMG procured the SBIR award in late 2003 and, over the course of the next two years, developed and tested prototypes which exceeded the specifications set by the Army and won awards and recognition.

The U.S. Army Natick Soldier Systems Center (NSSC) tested this collection of new closures in CB protection research and development initiatives. Products included CB protective suits, individual and modular collective CB shelters, and a variety of other protective application considerations. The DMG closure developed through SBIR funding, which has become the military benchmark for enhanced CB closure technology, is known as FLEXSEAL®. Along with the materials that comprise the clothing and gear which it fastens, FLEXSEAL can provide complete, lightweight protection for soldiers or civilians from liquid and aerosol agents, as well as existing and emerging chemical, biological, radioactive, hazardous and toxic materials. FLEXSEAL technology includes one or two-way closed end and separating closure mechanisms that can be folded and bent and still remain impermeable. Fortunately, due to the decreased threat of immediate need, none of these FLEXSEAL products are currently standard issue, but many standard issue items do contain other iterations of the closures developed by DMG through SBIR.

The designs developed under the SBIR award inspired additional joint-service R&D programs from other DoD and civil defense agencies to apply the closure technologies to their specific individual and collective protection needs, including hazardous, extreme cold climatic, CB, and air/water tight applications. Examples include:

• CB Protective Suits designed to be implemented as a joint-services product through the Dual-Use Science and Technology (DUST) program.

Upon completion of the SBIR contract, all military application business remained with DMG, and commercial integration of the product shifted to YKK. Outside the government, the closure technologies have found many commercial uses, particularly in the outdoor and recreation industries. Many dry bags, waterproof garments and water-related garments (such as wet suits, dry suits, sailing apparel), soft coolers, fishing gear, waterproof footwear, and waterproof luggage incorporate these closures.

DMG has received praise and recognition for the FLEXSEAL technology introduced to satisfy the SBIR contract. In 2005, DMG received the Army SBIR/STTR Phase II Quality Award which honors “originality and innovation of research; relevance of the research to the Army mission; and immediate commercialization potential of the research,” presented at a ceremony at the Pentagon. This led to the showcase of FLEXSEAL closures in the 2006 U.S. Army SBIR/STTR Programs brochure—an important achievement for diversification of application of the technology through other branches as this brochure is distributed widely at military trade shows and conferences.

DMG’s policy as a small business is to lead by example, and the example of their novel closure technology has bloomed into a diversity of applications. Yet DMG strongly believes there are likely additional applications for FLEXSEAL and related closure technologies that have not yet been brought to market. DMG seeks to get the word out within and between government agencies by serving on commercial sector groups, panels and committees. Staying true to their motto, DMG is also interested in providing mentoring services for other small businesses seeking or developing technology through SBIR funding.

This lightweight, flexible, multiple-configuration closure technology, originally developed through an SBIR contract in 2003—though it has undergone many iterations and improvements since—is still finding new uses today. The same materials used to protect humans from CB can also be used to protect the environment. Exciting new applications for FLEXSEAL and related closure technologies include prototyping for various types of suits including diving, heat preservation, pressurized, radiation protective, reduced pressure, and submarine escape. Equipment applications include protecting aircraft engines and munitions, while recreational product applications range from hot-air balloons to hovercraft, rafts, and water beds. There are even innovations such as soft runways with a zip-together design that offers rapid repair of damaged landing areas as well as environmental protection.