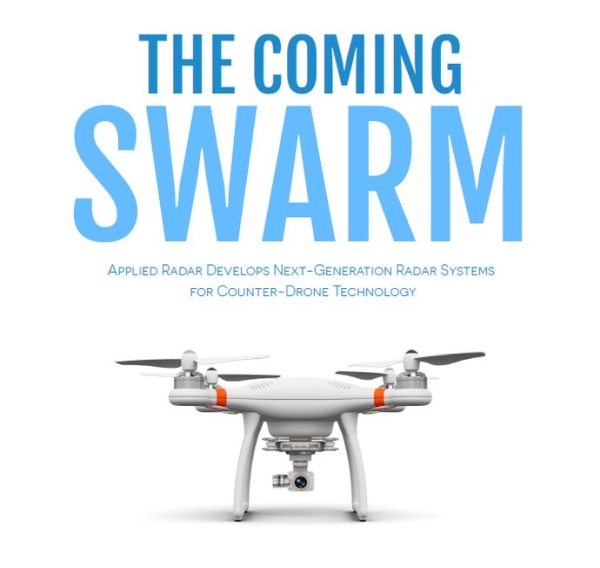 Today’s unmanned aerial vehicles (UAVs)—commonly referred to as drones, or unmanned aircraft systems (UAS) in military parlance—are smaller, faster, and harder to detect than ever before. While originally developed for military purposes, the last several years have seen an uptick in civilian drones used productively in applications like photography, cargo transport, agriculture, and scientific research.

But the rapid development of UAV technology has also led to an increase in drone use for criminal and terrorist activities. Drones have collided with aircraft, caused major disruptions at airports, crashed into high-security areas, and smuggled contraband into prisons and across borders. In Syria and Iraq, they’ve been used by ISIS to drop sm all bombs on coalition troops, while one was even used in an assassination attempt in Venezuela.

One company hopes to make the skies a safer place. A counter-drone technology created by Applied Radar, Inc., is based on its advanced radar systems, which use radio waves or microwaves to detect an airborne object’s location and speed.

For over twenty years, Applied Radar has specialized in defense-based radar, communications, and electronic warfare systems. The North Kingstown, Rhode Island-based company provides key components for defense applications such as airborne radar and sensing systems, ground-based radar, and shipboard/satellite systems. Most recently, it has focused efforts on the pressing issue of counter-UAV technology.

“Drones can become a threat to military, civilian, and commercial entities. It could be someone who launches a drone from a parking lot to spy on you with cameras, or a terrorist who uses a drone to drop a weapon,” said Dr. William (Bill) Weedon, founder, president, and chief executive officer of Applied Radar. “One of the applications of our technology is to counter these drones by detecting and distinguishing them from false targets such as birds or even tree leaves (when drones are slow-moving or stationary).”

In particular, the company focuses on next-generation radar systems that can digitally track multiple targets at once—a feature crucial for military countersues applications that need to track swarms of drones. These so-called “drone swarms” are of particular interest to the US military as they have the potential to overwhelm defenses at a very low cost point to the adversary. The threat is also asymmetric, similar to improvised explosive devices (or IEDs), as highly-capable commercial drones can be purchased for under $1000. This is compared to traditional ground-based or ship-based radars that the US military typically spends millions of dollars procuring and billions developing through large prime contractors.

Weedon and his colleagues spent several years working on ways to improve phased array radar, which itself represented a major advance over the now-obsolete (or nearly so) spinning dish radar antenna. One of the key challenges is making these new phased array radar systems affordable, which is where Applied Radar focuses a lot of effort. Given the proliferation of drones and the number of critical facilities that require protection from drones, affordability of the sensor and countermeasure is highly important.

Since the company’s founding in 1996, Applied Radar has seen dozens of contracts from the Department of Defense’s Small Business Innovation Research (SBIR) program. The SBIR funding spurred the advancement of defense-critical technology in various areas of electronic systems development, including digital phased array radar.

“We got involved with the SBIR program 20 years ago, when we received our first award in 1999,” said Weedon. “We used it to fund much of our growth and development over the years, and it was very good for us early on.”

“Radar systems are becoming invaluable for autonomous vehicles of all types, as well as safety systems in automobiles,” said Gregory Charvat, Chief Technology Officer at Humatics Corporation and a loyal customer of Applied Radar. “I’ve been working with Bill over the past 7 years on all kinds of projects, and he helps us bootstrap and build initial prototypes.”

Weedon founded Applied Radar just two years after graduating with a Ph.D. in electrical engineering from the University of Illinois at Urbana-Champaign. He wanted the freedom to work on research topics of his choosing within the realm of radio frequency and microwave devices. That gamble ended up paying off, as Applied Radar won several government contracts with the Air Force.

Over twenty years later, Applied Radar stays competitive by addressing emerging needs as threats continue to evolve. As a small company, it can be more flexible in focus than larger companies, and quick to change gears into new areas, such as counter-drone technology. Weldon and his colleagues have also leveraged their unique background as pioneers of a signal processing technique called digital beamforming to remain viable.

A phased array radar system consists of multiple connected antenna elements which work together as a single antenna to transmit and/or receive radio waves. Beamforming electronically focuses the radar receiver in a particular direction by methodically delaying the signal emitted from each element. The resulting constructive/destructive interference of the waves steers the beam in the desired direction without having to physically move the system, as opposed to spinning dish antennas from the past which had to be pointed in the right direction.

Digital beamforming lies at the heart of next-generation phased array radar systems. While analog beamforming combines all the elements’ signals to form one digital output stream to be analyzed, digital beamforming converts each element’s signal into its own digital output stream. This allows for several advantages in terms of performance, versatility, and cost. Perhaps most importantly, multiple beams can be formed to look in several directions simultaneously instead of one direction at a time.

“For counter-UAS applications, the military is really concerned about swarms of drones. To deal with such a large swarm of targets, you need a narrow beam that switches quickly in order to identify and target those drones,” Weedon said. “We were pioneers in the digital beamforming area, and we’re trying to use that knowledge to expand our market share and solve difficult problems, such as how to detect swarms of drones.”

Weedon envisions a system incorporating his digital phased array radar and a separate device to shoot down the drones, perfectly synchronized together to identify and destroy multiple targets as needed. As the proliferation of drones increases and more and more bad actors figure out ways to use low-cost and highly-capable drone technology for nefarious activities including disrupting commerce and commercial travel, illegal spying, cross-border drug activity, terrorism, or even military warfare, there will be an increasing need for counter-drone technology. The global counter-UAS market is presently valued at $500 million USD and expected to grow at a compound annual growth rate of 14.6 percent to a value of $1.5 Billion by 2026. Applied Radar hopes to capture a portion of this market with its counter-drone radar and other drone mitigation technologies.

“Digital phased arrays, which are Bill’s specialty, are at the very edge of technology,” said Charvat. “To have the ability to track faster moving targets, like nuclear missiles, is why we developed phased arrays in the first place. It really comes down the survival of nations and civilizations.”