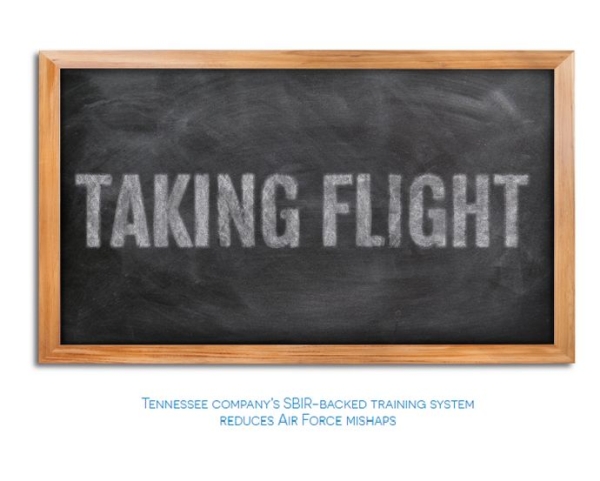 During one of Crew Training International’s recent training sessions, an instructor walked the classroom full of pilots and crewmembers through an actual real-life scenario.

The situation, the instructor explained, involved a problem with the landing gear on a U.S. Air Force aircraft. The pilot managed to resolve the problem and eventually land the plane, but there were several things she could have done to streamline the process and make for a more efficient result.

That same afternoon, one of the pilots from the class went on a training flight where they experienced the exact same landing gear malfunction. Using what he had learned from CTI’s training, they quickly worked around the issue and landed the aircraft with little fuss.

It was, according to Gregg Montijo, CTI’s senior program manager of crew resource management, a perfect example of the company’s training system at work.

“These are the types of stories that won’t show up anywhere statistically because they had good outcomes,”

Montijo said. “But at the end of the day, a good outcome is what we want.”

Founded in Germantown, Tennessee, in 1992 by Alan Mullen and Steve Harden, two former TOPGUN instructors, the company has built its name providing Crew Resource Management training to agencies and organizations around the world, helping to learn from previous accidents and cut down on future incidents. Boosted by an Air Force Small Business Innovation Research contract in 2007, CTI has helped save lives and aircraft through its classroom training sessions.

Since 1999, CTI has held a contract to provide CRM training for the Air Force, and its complex lesson plan includes teaching pilots and crew members “communication skills, coordination skills, situational awareness and decision making” among other skills, Montijo said.

“We take a crew through a real-life situation and along the way they’ll get to make various decisions and see those play out,” he said. “That’s the takeaway. From that classroom environment, they can then apply those skills to the airborne situation at hand and have better outcomes than what may have happened in the past.”

While it may be difficult to quantify the effectiveness of the training, Montijo said that through improvements to classroom training, an overall decrease in the Air Force mishap rate, and other anecdotal evidence, the system is quite beneficial. Most agencies use full-motion simulators for mandated CRM training, but Montijo added that the hands on, decision making approach pioneered by CTI adds a level of engagement that encourages skill retention across a wide variety of aircraft.

“No one is perfect; everyone makes mistakes, but we like to think the overall mishap rate has dropped for our customers based on the CRM training they have received,” he said.

The 2007 SBIR contract helped the company to further refine the human factor elements of its CRM training. The contract has enabled CTI to study mishap reports and why pilots and crews have made certain decisions in order to incorporate those lessons into its classroom sessions. Specifically, Montijo said, the contract focused on developing “interactive case histories”—essentially detailed examples of past incidents that instructors present to pilots and aircrews to assess what they might do in certain scenarios. How they respond is then compared to an optimal solution versus what actually occurred.

“What we’ve done is refined the process to make the scenarios more accurate, more emotional and less antiseptic,” Montijo said. “If you can make that emotional connection, folks can feel like that could have been them. And at the end of the day, if folks are making better decisions, we have fewer mishaps.”

In addition to the 21 different Air Force aircraft CTI has developed bespoke training for, the success of its system has led to the company garnering contracts from the Navy, Marine Corps, NASA and NATO aircrews. The company also provides training for the FAA and the DOE. On any given year, CTI is providing over 1,000 CRM classes for 8,000 plus pilots and aircrew at 52 world-wide locations. CTI’s CRM has even been used to develop an interdisciplinary medical team training system for surgeons, nurses, and anesthesiologists, called Dynamic Outcomes Management (DOM, now called DOM Lifewings), which has served to increase patient safety, reduce medical errors, and improve the quality of health care.

But despite its success, CTI is working hard to further streamline its CRM training through individual case studies of past mishaps, as well as a thorough categorization system for each aircraft it teaches—a highly detailed breakdown that Montijo calls a “23 and Me for aircraft.”

“We’ve gone back and looked at each weapon system, looked at their mishaps and categorized which of the CRM skills were a factor. Whereas in the past it’s tended to be one-size-fits-all, with this approach we’re trying to make the training tailored to a particular aircraft and mission,” Montijo said.

“All the CRM training we perform is with the hope that someone walks away with new or different knowledge that can help them on a future mission. If we have just one less mishap, the training pays for itself many times over, the aircraft remains in the inventory, and maybe we just saved a few lives, not to mention having a successful mission.”