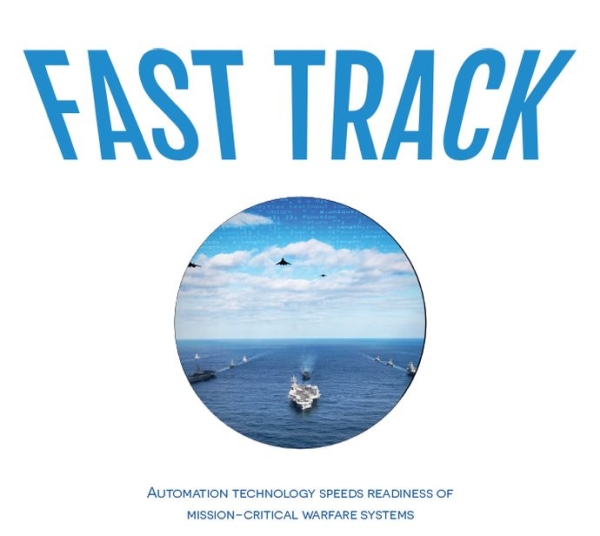 In May 2018, during a warfighting capabilities exercise, the USS Milwaukee fired four Longbow Hellfire missiles off the coast of Virginia. It was just the second at-sea launch of surface-to-surface missiles from a Navy littoral combat ship (LCS), and the first to integrate live fire with an intricate, simulated near-shore warfare environment.

Launching live missiles off the U.S. coastline requires considerable confidence in the software working behind the scenes. Increasingly complex, the mission-critical data systems that drive today’s warfare capabilities must meet thousands of requirements on numerous platform configurations while interfacing with subsystems synchronized across multiple domains. It takes rigorous testing and retesting to be confident that each system will continue to perform as expected. To assure that level of readiness for the LCS Program and scores of other projects, the Navy now leverages Automated Test and ReTest (ATRT), a suite of technologies from Innovative Defense Technologies (IDT) that enable rapid integration, testing, and certification of new and updated software.

ATRT originated under a Navy Small Business Innovation Research (SBIR) contract that was part of a larger Navy initiative to deliver software-driven capabilities to the warfighter as quickly as possible. At the time, most of the industry focus was on the use of commercial, off-the-shelf technology to develop software faster. IDT took a different approach. “We knew there was a lot of work being done to speed up how long it takes to write software. But fielding a capability was still limited by how long it took to manually test and certify the software,” said Bernie Gauf, CEO of IDT. “So our emphasis was on accelerating testing and certification through automation.”

IDT brought a lot to the table. Gauf and his IDT founding partners had a deep understanding of the processes and technologies used by the Navy as well as an exceptional knowledge of the SBIR program gleaned from their previous company, Digital System Resources (DSR), which provided surveillance and combat systems for the Navy. By the time it was acquired by General Dynamics in 2003, DSR was 75 on the Top 100 Federal Prime Contractors list. “We had the SBIR expertise and also a good understanding of the Navy’s needs, their limitations, and what they wanted to do,” said Gauf. “So when we saw the Office of Naval Research SBIR request we felt a model-based, system-engineering methodology combined with automated test and analysis could make a significant difference in reducing the time required for the Navy to field software based capabilities.”

Since then, ATRT has transformed how quickly the Navy deploys its large, complex mission-critical systems. Results consistently show that ATRT delivers, on average, an improvement of more than 85 percent in time and manpower savings over manual operations, as well as increased system quality and reduced total system ownership costs.

The Navy Sea Systems Command PMS 401 Navy on-site team at Lockheed Martin, Manassas, Virginia, first used ATRT in 2013 when budget sequestration meant making cuts to its certification testing budget. Automation offered a fast solution to cutting travel costs. “We’d been flying in 18 software technicians to run a 48-hour test, with three people per each of the six workstations per day. By automating just two workstations initially, we reduced that to 12 people,” said Mr. Brandon Kinas, team director. “After that, we started using it more and more. In 2018, for instance, we ran about 87 longevity tests using ATRT, significantly reducing the need for anyone to travel here for the test events.”

Kinas and his team have also seen significant improvement in system quality using ATRT. “It is impossible to verify every software configuration in all of our hardware during a certification event; it’s just too big. Manually, we were able to spot check about 15 percent, taking three or four hours to do it. With the IDT technology, we are getting about 90 percent coverage in about ten minutes, which is a huge plus for us,” he said.

For Kinas, ATRT’s ease of use is a significant asset. In developing ATRT, one of IDT’s priorities was making the technology as adaptive as possible so that it could be used without requiring changes to existing systems while allowing for the incremental application of automation. “Our strategy with each customer is to determine what their highest payoff with ATRT would be,” said Gauf. “Because each program is at a different point in their lifecycle it is important to ask what do they want to accomplish. Maybe it’s that they want to initially use automation to reduce the manpower required to run specific tests like was the case with the PMS401 on-site team or they may be interested in a much broader change.”

That was the case for Mr. David Gay. As test manager for Naval Air Systems Command Program Office 281, Gay was interested in how ATRT would integrate with the Joint Mission Planning System (JMPS) in management of the mission planning environments (MPEs) of multiple types of aircraft. PMA 281 manages between fifteen and twenty MPEs each year. “One MPE differs slightly from the next, but at the core they all have the JMPS framework, so it seemed like a good candidate to make use of automated testing. We could just use the same automation over and over again,” he said.

Gay tracked numerous areas to determine the return on investment with ATRT. He was particularly pleased with improvements in regression testing following monthly cybersecurity patches. “It had been taking about two weeks out of every month for one person to retest functionality for each MPE after the cybersecurity patches. We can now do that in one to two days with a single person testing 20 MPEs, so there is significant savings there,” he said. Gay was also impressed with ATRT’s consistency from MPE to MPE and from one month to the next. “There was a time when it was taking seven or eight hours per MPE to update the automation routines from month to month; it now takes maybe fifteen minutes. So we’ve shown that the automated procedures are relatively insensitive to changes in the MPEs,” he said.

Gay plans to apply lessons learned with PMA 281 to test and evaluation processes in other programs, which he also oversees. “I’d like to apply automation to our Common Control System, where our goal is to use one set of software to control multiple variants of unmanned aerial vehicles. It is the same concept, taking advantage of common software and functionality, and making it useable across a broad system of users.”

Gauf sees IDT’s success with the Navy as “just scratching the surface” of opportunity within the Department of Defense. IDT now has contracts with the Missile Defense Agency (MDA), the U.S. Army and the U.S. Air Force, and expects to expand these and other DoD relationships. “The systems within the DoD are different but their challenges are similar,” he said. “By and large, they all have software based capabilities they want to deliver faster, and that’s only going to increase in my opinion. To do that effectively, you need a model-based system engineering methodology combined with a high level of automation.”

IDT's innovative approach to automation technology earned the company the SECAF 2013 Government Contractor of the Year Award, reaffirming Gauf’s belief in the company’s strategy to offer solutions that work with their customers’ existing systems. Following that path, the Virginia-based company has thrived. It now has more than 160 employees in multiple locations, with ATRT technologies being utilized by projects throughout the Navy’s major system commands by the end of 2018.

“After we got that first SBIR for what would become ATRT, we were off and running,” Gauf said.

A Longbow Hellfire missile launch off the coast of Virginia was enabled by software-testing technology created by IDT.