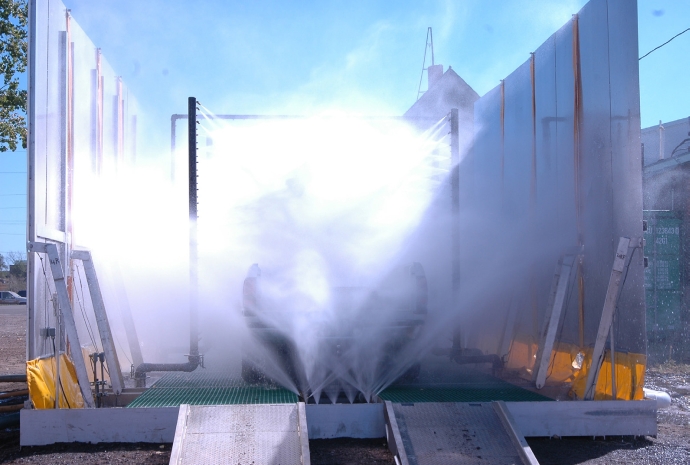 In the aftermath of 9/11, and even in the midst of unspeakable tragedy, New York City was faced with a daunting cleanup effort. A seemingly endless progression of trucks began hauling debris from Ground Zero, load after load of material that was potentially contaminated by asbestos and other hazards. The Federal Emergency Management Agency and the Environmental Protection Agency both knew they needed a solution for quickly decontaminating trucks before putting them back in the rotation. They found just what they were looking for in South Dakota.

For 19 days and nights, OctaFlex, a small company on the Cheyenne River Indian Reservation in South Dakota, worked around the clock to develop enclosed, drive-through truck wash units. Three of them were delivered to Ground Zero in November of 2001. Company owner, Richard Gross flew to New York to oversee the setup and train crews on how to use them. For the next six months “every minute and a half, a truck pulled through and was automatically washed, concrete, steel, and all,” Gross said in a Rapid City Journal article from 2005. More than half a million truck washes later, the cleanup effort was complete.

Terry and Barb Gross started a small family business operating crop-dusting planes in Timber Lake, South Dakota, a region with one of the highest unemployment rates in the country. Required by government regulations to prevent groundwater contamination from the washing and rinsing of pesticides from their planes, Terry and Barb saw a business opportunity. They could leverage their experience by helping other companies meet compliance standards mandated by the Clean Water Act. The United States Department of Agriculture eventually supported the OctaFlex research initiatives and aided the company in developing a more efficient washdown and decontamination process for both civilian and military use. In 1998, the company won a Small Business Innovation Research (SBIR) award. Specifically, OctaFlex was asked to find a solution that would protect groundwater. The result was the original concept of the wash deck, a modular portable decontamination pad that also collected the rinse aid, preventing groundwater contamination.

Along with protecting the environment and groundwater, OctaFlex soon realized that its innovation could address the spread of agricultural pests, harmful bacteria, and toxic chemicals introduced to the U.S. from the dirt caked on military vehicles previously stationed abroad. The spread of exotic pests from foreign countries can cause significant damage to public health, agriculture, and the environment. To prevent such spread, military vehicles are required to undergo wash-down operations before being deployed from one region of the world to another. Substances commonly used in these operations can themselves contaminate local environments and require large quantities of fresh water—up to 250,000 gallons for 300 vehicles. The Department of Defense (DoD) needed to address cross border contamination with a process that was fast, effective, and safe, both for personnel and the envi¬ronment. Efficiency of the wash-down unit was also key.

OctaFlex developed both open air, ramp-based wash stations to clean the outside and undercarriage of vehicles and collect rinse aid, as well as fully enclosed drive-through units.

Terry and Barb were often told that they would need to move their operations to a larger city to survive, but they felt committed to providing opportunities at home. OctaFlex has been rooted in Timber Lake, a town of only a few hundred residents, since the company’s founding in 1995. OctaFlex’s hires came mostly from the Native American population and local farmers and ranchers. Living in the same community where they ran their company, OctaFlex understood the needs of its employees. And while the naysayers were waiting for OctaFlex to go broke, the company instead used another DoD SBIR to develop and produce their first Containerized Assembled Washdown Facility (CAWF), earning them immediate accolades and a host of awards, including several Tibbetts Awards as well as local and state business awards, letters of commendation from the U.S. Senate and Congress, and military honors such as the Army Research Office Challenge Medal.

Barb Gross credits a close collaboration with the military with much of their success. “The SBIR funding has been immensely important for our small company,” she said. “We do our own research, prototyping, and manufacturing—everything from start to finish. We’ve never had an outside investor, so SBIR has been huge, not just for keeping the doors open but also for keeping local people employed and taking an idea from conception to reality.” And the impact for the military has also been significant, providing efficient decontamination of vehicles while recycling water, increasing the safety of warfighters, protecting the environment, preventing harmful diseases and the spread of bacteria, and saving labor, time, and resources.

After Terry Gross passed away in 2007, ownership of OctaFlex went to Barb Gross, who now leads the company with their son, Richard. Barb is already thinking about other applications for OctaFlex’ technology. She’s set her sights on creating portable units for onsite construction cleanup, and using the technology in the contexts of pesticide use, such as professional landscaping, golf courses, and public parks maintenance. Barb is even considering developing a wash-down unit for imported cattle and other livestock.

Since its inception, OctaFlex has endeavored to address both commercial markets and warfighter needs, and is proud to be a part of their region’s economic upswing. They’re especially gratified to support the Native American population with training and employment. Currently, 95 percent of the company’s staff are Native American. Despite her company’s immense success, Barb has stayed humble: “We’re just a small company trying to make a difference. What we do is not glamorous, but it’s very much needed, and we take pride in providing a solution and taking care of our people.”

OctaFlex’ work ethic paired with their knack for practical solutions impressed Stephen Lee at Army Research Lab. “OctaFlex is a truly great partner for DoD,” he said. “From their small town in South Dakota, they have provided these essential washdown systems to the US military in many different locations around the globe. They have been not only fantastic to work with and extremely responsive but also uniquely able to adapt their technology to our specific needs.” According to Lee, OctaFlex has already saved millions of taxpayer dollars and increased the safety of military personnel. He believes that the technology could also be used in fire departments and during chemical-biological attacks on U.S. soil or abroad.

The company is steeped in a culture that values the satisfaction of a hard day’s work and a job well done. OctaFlex works quietly in the background, cleaning up and providing an essential foundation for military support and commercial industry.