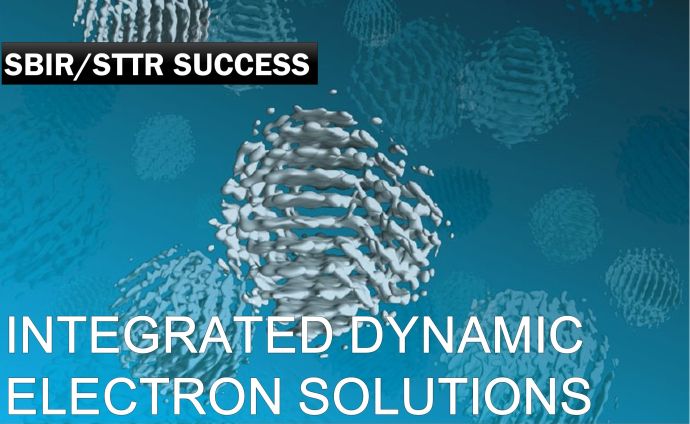 The latest advances in nanotechnology, including electronic and energy storage devices, have emphasized the need to add a temporal dimension to transmission electron microscopy (TEM) to follow atomic motion in materials, in real time and far from equilibrium. Being able to image materials with a time resolution of picoseconds to microseconds can reveal the inner workings of key processes for energy and biology applications. Examples are pulsed-laser sintering of nanoparticles for additive manufacturing, chemical reactions and structural changes at battery electrode interfaces, and studies of protein movement in biology. Integrated Dynamic Electron Solutions, Inc. (IDES) is commercializing technologies that allow TEMs to capture images at ultrafast time scales, driving technological and scientific progress across a host of markets and disciplines.

The recent acquisition of IDES by JEOL, a leading TEM manufacturer, demonstrates the strength and commercial readiness of IDES’ technology, which was born out of academia and national laboratories 11 years ago and developed in part thanks to two DOE SBIR awards funded by the office of Basic Energy Sciences (BES).

Working as a graduate student at UC Davis in 2008, Dr. Dan Masiel, IDES’ founder and CEO, was an early researcher in the Dynamical TEM (DTEM) group at Lawrence Livermore National Laboratory (LLNL), a research effort in collaboration with Drs. Bryan Reed and Thomas LaGrange, former LLNL staff scientists and co-founders of IDES. DTEM achieves high temporal resolution, roughly 10-50 nanoseconds, using a pulsed laser to illuminate a standard electron source and extract a large number of electrons in short pulses by the photoelectric effect. The production of femto- or nano-second electron pulses, and their subsequent manipulation in the microscope to form high resolution images, involves integration of laser systems and electron microscopes and development of new experimental methodologies. IDES was founded by Dr. Masiel shortly after graduation when he and Drs. Reed and LaGrange realized that there was a large potential market for time resolved TEM instruments. Over the subsequent 10 years, IDES grew its product offering to cover timescales ranging from “ultrafast” (femtosecond to picosecond timescales) to video frame rates. These additional developments in TEM image acquisition would lead to reliable methods of acquiring TEM videos at sustained rates of ~20 kHz. These frame rates make it possible to study many nanoscale materials and biological processes at their native timescales and therefore address a large unmet market need in the area of in in situ TEM. In situ TEM, a technique that became widely adopted in the last 10 years, involves doing experiments inside the microscope, typically using either special sample holders or pulsed lasers to drive material processes that can be captured by the microscope. This allows researchers to study previously inaccessible nanoscale non-equilibrium material events at the heart of applications in materials science, chemistry, biology and condensed matter physics.

IDES’ innovative software and hardware package, Relativity®, allows a TEM camera to act like a much faster camera by combining electrostatic subframing (ES) with compressive sensing (CS). ES subdivides a TEM camera into subframes and rapid switches among them during each exposure. This alone allows modern cameras to achieve continuous frame rates of many kHz. CS further improves throughput by scanning through the subframes in a known pseudorandom sequence, which acts like a data compression algorithm. CS reconstruction algorithms undo the data compression and allow 100 or more frames of video to be extracted from each camera frame acquisition.

The same control systems and algorithms, combined with a new electrostatic dose modulation (EDM) system developed alongside Relativity®, also have the potential for adaptive scanning to reduce the effects of electron dose, advanced denoising analysis, and eventually applications in tomography and structural biology. The same technology can be used for spectrum image acquisition in scanning TEM (STEM), and in 4D STEM, a recently developed STEM technique that captures all of the electron beam’s elastic scattering information, enabling uniquely deep and precise analysis through post-processing. Both these techniques demand high levels of throughput and system integration and can produce very large data sets requiring extensive analysis. With IDES’ technology, large data sets can be acquired and analyzed faster and with better automation, opening up the bottleneck that limits performance in 4D STEM and similar techniques.

IDES’ fast video acquisition technology has been implemented in the form of inexpensive add-on products that can be installed quickly on a TEM without interfering with normal system operation. Subsequent to the merger with JEOL in January 2020, many IDES products are already being offered as options in JEOL TEMs.

IDES’ beginnings are similar to those of many startups in the San Francisco Bay Area. However, as Dr. Masiel recalls, “Soon after being founded, IDES found out that venture capitalists” which are well known to finance many startups in the region, “do not fund development of analytical equipment”. Therefore, IDES had to rely on revenues from sales of its early DTEM product line to sustain its initial operations. For this reason, the SBIR grants were critical to develop the Relativity® electrostatic subframing system, as well as a subsequent platform for 4D STEM. “Things really started to change for us with the DOE SBIR,” explains Dr. Masiel. “The DOE funds allowed us to carry out the R&D needed to test our concepts, pivot when necessary, and ultimately design a product that addresses the latest TEM market needs. This is how IDES’ second class of products was developed, which had a big role in the acquisition by JEOL.”

IDES’ SBIR experience illustrates the importance of being flexible while evaluating the technical feasibility of an idea in Phase I. In fact, while IDES’ scientists had initially aimed at developing a package for STEM spectrum image applications, during Phase I they realized that their concept had some flaws and needed to be modified. By acknowledging the technical faults and refocusing on a different approach, which ultimately yielded Relativity®, IDES’ team was able to win a Phase II and a subsequent Phase IIA, which positioned the company to attract the interest of JEOL, leading to its acquisition.

Dr. Masiel noted that the benefits of an SBIR grant go beyond a source of undiluted capital and can be quite unexpected. In the case of IDES, the simple fact of being publicly listed as winners of an SBIR award made their recruiting efforts much easier and productive. One of the key engineers behind Relativity found and contacted IDES by looking through the SBIR awards lists posted online. “Before we even had the capability to start recruiting, we were able to hire an extremely talented professional, who is contributing vastly to IDES’ growth,” states Dr. Masiel.

The relationship with JEOL did not develop overnight but started back at UC Davis and LLNL during Dr. Masiel’s time in graduate school. It was back then that his research group started to interact with JEOL’s engineers, who were regularly consulted as the group developed the first product line, which was designed for the JEOL 2100 model microscope. Later commercial success was the result of the superior performance of IDES’ products and the company’s track record of happy customers in academia and in National Labs. “Throughout our contacts and interactions, JEOL was always very interested and receptive to our technology” says Dr. Masiel

Coaching customers and providing excellent customer service has been one of the cornerstones of IDES’ success. “In a way”, Dr. Masiel explains, “we had to grow our customer base to include a broad range of scientists interested in ultrafast phenomena, not just transmission electron microscopists trying to add time resolution to their microscopes.” As TEMs are known to be very complex machines and to require a great deal of proficiency by the user, IDES’ team spent considerable time educating potential customers about the benefits of addressing both space and time resolution. IDES’ focus on customer success definitely paid off when early adopters became product evangelists, and customers that would have never bought a TEM before realized they could now observe and explain some of the most exotic behaviors in functional and biological materials.

As a wholly owned subsidiary of JEOL, IDES will gain important resources including increased R&D resources and larger worldwide customer channels. Thanks to this outcome IDES will be able to commercialize their entire suite of technologies including those developed within the DOE SBIR program. The acquisition represents a significant investment by JEOL in both IDES’ technology and the Tri-Valley region in California. As a result IDES anticipates creating 15-20 jobs in the next five years.