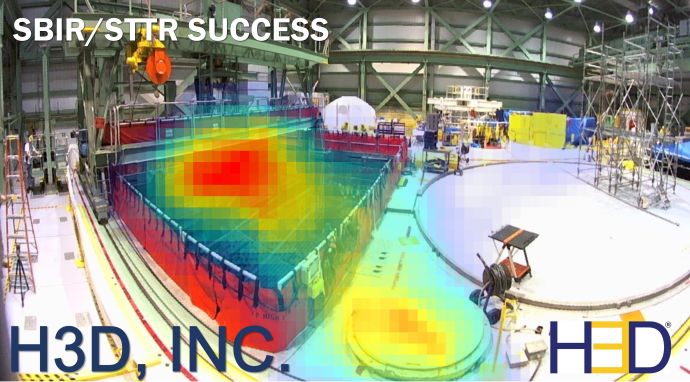 Technological progress is often linked to the discovery of a new, advanced material with intrinsically higher performance. However, the new material, typically a complex compound, is often challenging to grow with the chemical purity and/or microstructure needed to be molded into a marketable product. Overcoming these materials science issues requires fundamental scientific understanding and innovative engineering. For applications involving gamma ray detection, the “new material” is the wide band gap semiconductor cadmium zinc telluride (CdZnTe or CZT), exhibiting performance similar to the gold standard of Higher Purity Germanium (HPGe) while operating at room temperature (RT).

H3D, a spin-off of University of Michigan founded in 2011 by Professor Zhong He and three of his former Ph.D. students, is commercializing the world's highest-performance imaging spectrometers by solving important materials science challenges to utilize the full potential of CZT. H3D breakthrough technology is based on Professor He’s research over nearly 20 years and was developed to address the Government’s need for an operationally convenient radiation detector for emergency response to nuclear incidents. “Ge detectors need to be refrigerated at -200 °C to work and are bulky and problematic to be carried around for the Department of Defense (DoD) special operation forces” explains Dr. Willy Kaye, one of the founders of H3D and current CEO.

CZT single crystals, as well as other semiconductors operating at RT, grow incorporating many defects and impurities, which lead to leakage currents and spatial dependencies, seriously degrading performance. The core discovery made by the H3D team is a way to implement three-dimensional (3D) position sensitivity in CZT detectors. Instead of using one single readout electrode, the detector is pixelated into an array of more than 100 electrodes. In this way, the noise is spread through the array of readout channels yielding 100 times smaller leakage signals on anyone pixel. This approach allows H3D to make much larger detectors without compromising performance. Charge drift time between electrodes yields depth of interaction and 3D position information. Based on which pixel displayed the signal, the point at which the gamma ray interacted with the crystal is determined. The 3D event reconstruction also allows for increased energy resolution, with great improvements in isotope identification and quantification. Ultimately, 3D correction makes it effectively possible to remove material non-uniformity and use poor grade material for high grade measurements. It is even possible to localize the source of the radiation and turn the detector into a radiation camera by using the 3D interaction information to reconstruct Compton images. The result is a room-temperature camera capable of detecting and localizing hot spots, identifying and quantifying the isotopes, and visualizing the source of gamma radiation in real time.

The discovery enabling 3D sensitivity was made in 1998 by Prof. He, who went on to build a large research team at University of Michigan, attracting among other postdocs, Dr. Kaye, Dr. Feng Zhang (Co-founder and CTO), and Dr. Weiyi Wang (Co-founder and R&D Director). Reducing this concept to a practical product of suitable size for portable applications required developments in microprocessors’ speed and performance that were simply not available at the time. “Nobody in our team”, says Dr. Kaye “wanted to found a company. We just wanted to transfer our invention to a National Laboratory or a large company that could complete the necessary R&D to bring our invention to the market.”

The most significant attempt at commercializing H3D’s innovation was made by GE with significant support from the Federal Government and a very qualified team of engineers. This attempt did not succeed and GE abandoned the project soon after. The reason for this failure, according to Dr. Kaye, is linked to the lack of technical knowledge of GE managers, who rushed in applying a familiar business model to a product that was not reliable enough to transition to the manufacturing stage. This is not a unique occurrence; in fact, many founders of deep tech startups recognize that knowhow and dedication by the original developers is key to producing a workable prototype and meeting market requirements. In many cases, partners in industry or research institutions lack the institutional mind set to work out all the minute details that make an invention reliable and market ready. This is what makes the SBIR program so valuable according to Dr. Kaye. “In the absence of SBIR, the team of original inventors would not have the opportunity to conduct themselves the R&D needed for the purpose of commercializing their invention but would have to hand it over to a company, often with uncertain results.”

The defining event for the H3D founding team at University of Michigan came in 2010 when, as part of an ongoing collaboration with the Defense Threat Reduction Agency (DTRA), the team had the opportunity to field test the newly developed, stand-alone radiation imaging spectrometer at the Nevada National Security Site. The stakes were high and hurdles had to be faced as the spectrometer broke during the trip and was repaired by Dr. Zhang and Dr. Kaye in a hotel room. In the end, the test was a success and the team made then the decision to start a company. “We did not want our key, irreplaceable scientists to go look for another job”, explains Dr. Kaye. “We knew that if that happened, the technology we had developed would never become an actual product.”

By 2011, the company was formed and won a statewide startup competition in Michigan. Thanks to groundwork that had been laid out during the previous decade, by January 2012, H3D had its first DTRA contract for developing military-grade units. Although H3D got off the ground thanks to the interest of the DoD, relying only on military contracts would have put the company out of business. This is because military contracts take a very long time to be arranged and involve many requirements and layers of bureaucracy. For example, early in the history of the company, a $2.3M DoD contract suddenly fell through after months of negotiation, making the H3D team realize the importance of diversifying their commercialization strategy as opposed to relying exclusively on Government acquisition. “Government grants and contracts form an important bridge across the Valley of Death”, says Dr. Kaye; “however, these funds make only a plank of the bridge and it is necessary for a vulnerable startup to look into other sources of revenue in the commercial market.”
Without the SBIR, a startup could not take on the risk necessary to develop the most innovative product they can conceive and would continue marketing a Minimum Viable Product (MVP) indefinitely to keep their employees on payroll. “The SBIR grants from the Department of Energy (DOE) put us in a position where we could take chances and that is priceless” says Dr. Kaye. “In addition”, Dr. Kaye continues, “it is important to use Government funds wisely by advancing Government needs without losing sight of the company’s ultimate commercialization goal.” In Dr. Kaye’s opinion, the DOE SBIR commercialization plan gives a company enough freedom to figure out how the R&D necessary to solve a DOE need can also be used to validate broader assumptions and to advance the company’s commercialization vision.

Today, thanks in part to the support from a Phase II and four Phase I DOE SBIR awards, H3D is a profitable business with 30 employees and a product line yielding revenues equal to many times the original SBIR investment. H3D’s employee count is expected to increase to nearly 40 by the end of 2020 in response to newly awarded SBIR projects. Nuclear power plants, which form almost 50% of H3D’s customer base, purchase multiple handheld cameras, which are significantly cheaper and easier to use than the old industry standard, 40-pound cryogenic radiation detectors. However, the majority of sales come nowadays from commercial customers in a broad international market addressing nuclear safety and first response operations.

During our conversation with Dr. Kaye, a few key reasons for H3D success emerged. The first one is certainly the team’s passion and dedication in wanting to see their discovery reach the market. H3D had to endure significant bootstrapping in the early days and across funding gaps before they were able to raise any VC funds. Another reason for H3D success is linked to the company’s twofold approach to customer acquisition. On one hand, H3D leveraged millions of dollars in Government contracts, largely based on R&D services for agencies such as the National Institute of Health (NIH), DOE and DoD. On the other hand, the company pursued commercial customers from the very beginning, making sure the prototypes developed for the Government were also responsive to an identified commercial market need. In addition, the H3D team was able to engage in R&D collaborations with multiple DOE National Labs, which provided facilities and equipment to test and advance H3D prototypes, and in one case, crucial intellectual property that was licensed by the company. Finally, being coachable has always been an important quality of the H3D founding team. Composed of Ph.D. nuclear scientists, the team has always been very receptive to entrepreneurs’ advice and mentorship, which was initially provided by the startup incubator at the University of Michigan, and later on by the company’s own board of advisors. 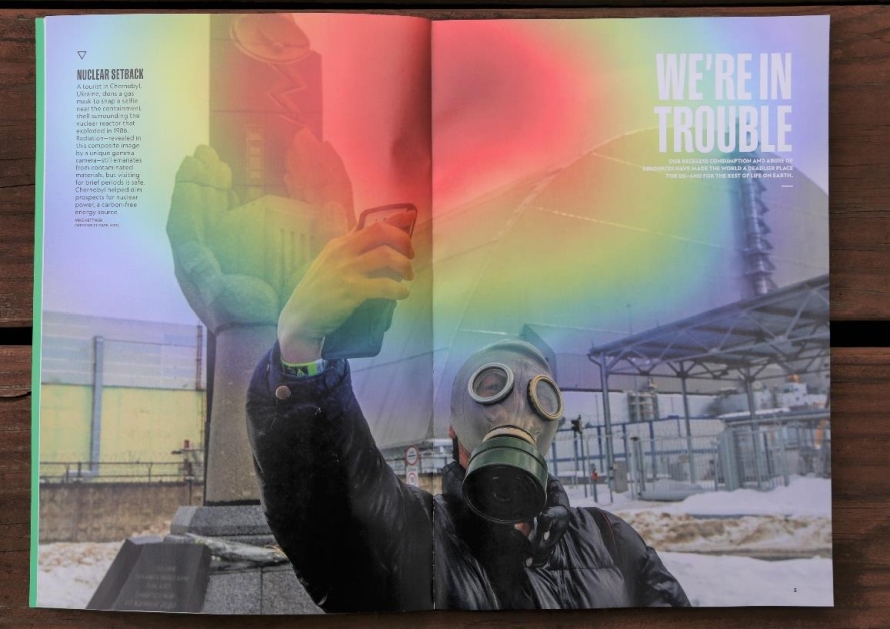 An impressive demonstration of the spatial mapping capabilities of H3D radiation cameras for the general public is displayed in the April 2020 issue of National Geographic celebrating the 50th anniversary of Earth Day (see figure above). Here an optical photograph of the area outside one of the former Chernobyl nuclear reactors has been matched to a radiation map of the same region yielded by H3D’s radiation-imaging technology to precisely illustrate the amount of radiation raising from the ground below the reactor and scattering off the sky.