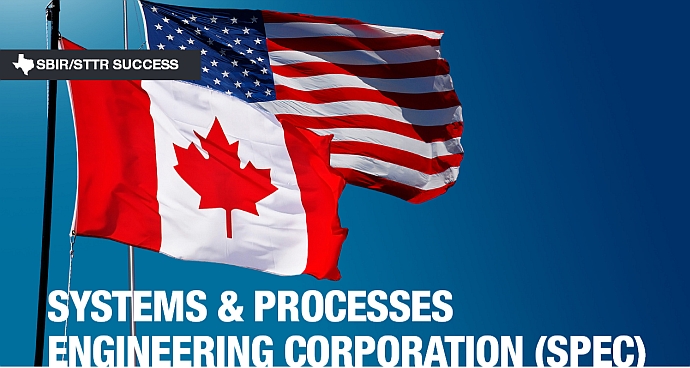 Spanning nearly 4,000 miles, the U.S.-Canadian border – referred to as the International Boundary – is the longest international border in the world. With long stretches of mountainous terrain and heavily forested areas, new technologies are heavily pursued to secure the perimeter and ensure individuals only cross in designated border controls. When the Department of Homeland Security issued a solicitation in 2008 to further secure the border with LADAR technology that could detect a moving target, the Austin-based Systems & Processes Engineering Corp. quickly responded to the request. Founded in 1986, SPEC has a long history of developing creative technologies and integrated product solutions for both military and corporate customers.

After securing a Phase I award with DHS and proving the feasibility of the concept, SPEC embarked on its Phase II project to develop a covert, unattended sensor for real-time monitoring of the passage of people and vehicles in critical, remote border areas. This Advanced Unattended Ground Sensor (AUGS) forms a robust network of sensors, using a variable information bridge, to relay actionable information to the Customs and Border Patrol (CBP). Advanced image processing techniques are used to discriminate targets of interest from naturally occurring objects and events. AUGS employs SPEC’s advanced, miniature Laser Radar (LADAR) technology in a single ended tripwire sensor and an imaging camera, as well as adaptable, networked communications and anti-tamper mechanisms. The goal was to put these units along the border by camouflaging them into tree trunks and across coves on the Great Lakes. Once a sensor picks up a target, an RGB camera is triggered and an infrared flash captures the image and transmits it in real-time via a Radio Frequency (RF) communications unit. Supplementing the hardware is a GUI-based software application for warning and report.

“We had been working on some 3D imaging LIDARs for NASA, and when this program came along, that technology evolved and we started to add image fusion with the LADARs to get that change detection,” says Brad Sallee, Vice President of Systems Technology at SPEC. “We are essentially geolocating the object, imaging it and then grappling with it and dissecting it before putting it back together again as the object that changed and its size.”

Not surprisingly, this ability has piqued the interest of both NASA and the National Reconnaissance Office for use in the most highly technological satellite imaging and robotics. Viewing chemical compositions from a distance could be highly beneficial to NASA during its meteorite and Mars missions, to determine which areas they want to further inspect. This same kind of scouting can be applied to forest management. By looking at the volumes of trees and counting the animals underneath, customers in the environmental sector can keep close tabs on wildlife even under heavy foliage. SPEC is currently assisting an oil consortium in Canada, to ensure its impact on the environment is minimal.

“Commercially, there is a lot of potential in the farming industry,” says Sallee. “By having this LADAR and RGB camera together, you can view down through the crops and assess the vegetation levels and look at the health of the plants. A little UAV scans the entire area – you just plug in the GPS coordinates of the field and press go. The UAV then flies the field and pumps out the data.”

SPEC recognizes the impact of the SBIR program and hopes that they will continue to provide solutions within the government sector.

“The best thing about the SBIR program was the opportunity we had to combine all of these technologies and the software that resulted from the program,” says Sallee. “We were able to really evolve the technology and that has opened up a lot of doors for us.”

SPEC has long utilized the SBIR program across many agencies. From developing Terrain mapping LADARs for the Army, to individual solider LADARs for DARPA, to the miniature ground mapping LADARs for NASA, the company has made a name for itself within the SBIR community for delivering integrated product solutions. With just forty employees and the market for advanced imaging techniques not nearly reaching its peak yet, SPEC will certainly be a company to watch during its transition phase.