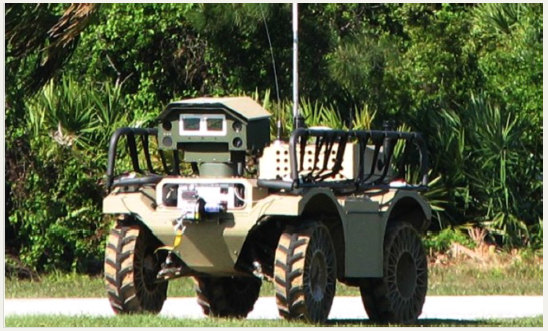 Warfighters have to move increasingly larger mission loads to objective areas. This has led to the warfighter needing to transport combat loads that exceed their carrying capacities. To lessen the load carried by each individual, Micro Analysis & Design, acquired by Alion Science and Technology in May 2006, worked with General Dynamics Robotics Systems to demonstrate a self-mobile trailer called the Autonomous Expeditionary Support Platform (AESP). The AESP can carry 1,000 pounds of equipment or personnel and follow a foot patrol through any man-passable terrain. AESP is capable of fully autonomous operation and can operate in Follower mode using Global Positioning System (GPS) breadcrumbs, or waypoint navigation mode. AESP can also be teleoperated or Radio Controlled. In addition, the system can be configured for seated personnel, Medical Evacuation (MEDEVAC) stretchers, and cargo transport. The vehicle has an unloaded weight of no more than 1,700 pounds and is sized for transportability on a High-Mobility, Multi-Wheeled Vehicle (HMMWV) trailer, CV-22, MH-47, MH-53, MH-60 and MARK-V. AESP can travel at up to 14 kilometers per hour (kph), is capable of fording water of 36 inches to 48 inches, and has an auxiliary winch function for various hoisting/pulling needs. AESP's integrated power generation payload creates 1 kilowatt (kW) of various volts alternating current (VAC) and volts direct current (VDC) power levels, which can provide expeditionary power to support operations in any area of interest as well as auxiliary power for medical equipment and power tools.

Micro Analysis & Design received total Small Business Innovation Research (SBIR) funding of $1.389 million for the design and development of the self-mobile trailer from the Department of Defense (DoD).

For a mission involving a parachute payload bundle deployed with troops, the AESP could expedite bundle recovery by navigating the bundle to a designated troop location.

The AESP could act as a forward observer for Reconnaissance, Surveillance and Target Acquisition (RSTA) missions, as well as providing laser ranging, surveying, airfield density measures and target designation capabilities.

The system could have commercial applications in security and warehousing, and as a supply carrier for smoke jumpers fighting fires in rough terrain.