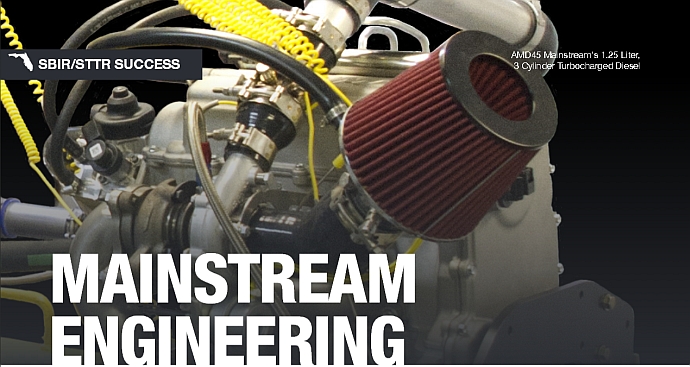 “Taking a product to market is always the goal for us,” explains Scaringe. “Even before we begin the proposal, we are examining the market side of things.”

Fast forward to today, and Mainstream Engineering is posting revenues in excess of $20 million a year, and continues to supply solutions to NASA, DOD, DOE, DOT, USDA and the commercial industry with its vast product lines of advanced thermal control and energy conversion technologies.

Mainstream’s air conditioning product line – QwikProducts™, which includes dozens of specialized and patented products used in the air conditioning and refrigeration industry, were all originally developed under SBIRs. In 2001, EPA regulations brought about the need to find alternatives for the R-11 and R-113 flushing agents that were used to clean pilots’ oxygen breathing systems. When the Air Force released a solicitation to find the solution, Mainstream’s response was a biodegradable, non-toxic flushing agent with no long-term environmental or health risks. The flushing solution, trademarked as Qwik System Flush®, found its niche in both the military and commercial sectors and is currently sold by air conditioning trade wholesalers all over the world. Similarly, Mainstream’s QwikBoost®, originally developed to improve the performance of NASA thermal control systems, is sold in automobile supply houses around the world (as an ingredient in R-134a+) to boost the cooling capacity of auto air conditioning systems. Mainstream recently signed both a $40 million production contract to produce the military’s Tricon Refrigerated Containers (TRCS program) and a $60 million production contract to produce the military’s Improved Environmental Control Units (IECUs).  While both were competitively awarded without any SBIR preference, these efforts were directly derived from Mainstream’s SBIR efforts.

That’s not to say, though, the path to commercialization is always an easy one. While its products in the refrigeration industry found high demand and praise, it has been Mainstream’s more risky ventures that are a testament to its perseverance.

The company recently developed the world’s smallest 3-cylinder diesel engine, the AMD45™, which uses automotive design principles coupled with durability enhancements for demanding military applications.  The project was met with skepticism and was denied a Phase I award. After three attempts, they were eventually awarded a Phase I/II award. The AMD45/3-cylinder, 1.25 L Turbodiesel for Demanding Military Applications was successfully completed and manufactured in-house. This new, lightweight diesel power plant will be supplied to off-road vehicle manufacturers allowing them to make high-powered diesel versions of their off-road vehicles for military JP-8 fueled applications. The company is pursuing the development of extremely lightweight diesel generator sets from this compact lightweight diesel engine. Along the way, Rivian Automotive was spun off to run with innovations in automotive manufacturing and represents a tremendously successful new car startup.

“It’s very rare if you have a great idea, for people to say, ‘Hey that’s a great idea!’” added Scaringe. “Usually they say, ‘Well why hasn’t anybody thought of that before?’ You have to be passionate about it and keep pushing until you prove it’s a great idea.”

Another one of those ideas the team is working to bring to market is their Biomass project, which involves traveling to the landfill and parking an 18-wheeler which will process organic waste and turn it into number 6 fuel on site. This solves the problem of transporting waste long distances, which is not economically viable. The completely self-contained truck converts 10 tons of waste a day into 1,300 gallons a fuel. Once the fuel is made, a tanker truck can deliver the fuel directly to the customer. This type of fuel, which is generally used to power ships or power plants, can be profitably and quickly produced. Mainstream received follow-on funding from the Army as a method to get rid of waste. They currently have a tenth scale prototype which produces 130 gallons of fuel a day and are developing full-scale prototypes to get on the road shortly.

“With any SBIR award, the mindset should be...the government is helping pay for our development – you can’t always expect them to pay for all of your development.  However, any help is better than none, if you are really serious about getting the product to market. If you get a Phase II, or Phase III, that’s all the better, but if you look at it like you have to get government money to get the product completed, then that is the wrong attitude,” explains Scaringe. “The government is here to help you develop a product that they want. They want you to get to market, and we want to get to market. We don’t care about only minimally satisfying the contract – we want much more, we want a successful commercialization. Maybe if we get 100K from an SBIR, we will invest 200K of our own money. You have to get to the finish line.”

That attitude is the reason Mainstream Engineering has a 100 percent commercialization index rating for the DOD, and the reason why many products have gone right from the Phase I or Phase II to a commercial shelf.Mainstream was also the recipient of two Tibbetts Awards, for excellence in commercializing SBIR-funded technologies, winning the most recent award in 2014.