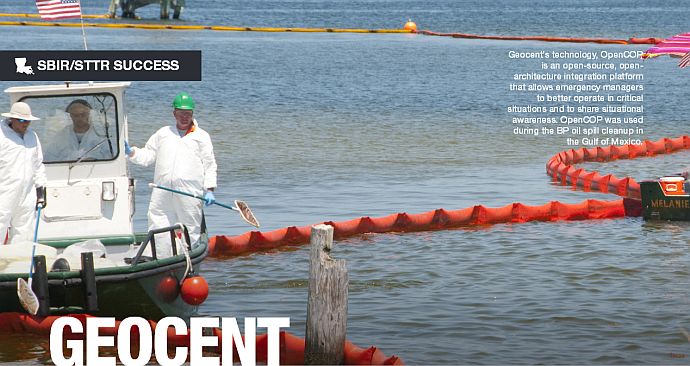 Emergency management teams often cite communication issues as their biggest challenge during natural disasters. This was never more transparent than during the devastation of Hurricane Katrina on the city of New Orleans.

First responders, military personnel, federal agencies, FEMA, municipalities, city officials and state governments were all trying, unsuccessfully, to get on the same page as to where assets were located, where troops were stationed, who needed emergency medical attention, which roads and exit routes were blocked or destroyed, and other critical logistics.

Louisiana-based Geocent knew that if these organizations could somehow share geospatial information on a map that could work with each team’s own tools, communication would be greatly enhanced. This led the company to respond to a Small Business Innovation Research (SBIR) solicitation from the Department of Homeland Security (DHS) on how to support emergency response capabilities. The result was a technology that could be used across multiple agencies for a more comprehensive common operating picture.

“Through this SBIR, we built our Open Common Operating Picture, or OpenCOP, which is an open-source, open-architecture integration platform for enabling the dissemination of complex geospatial data,” explains Keith Alphonso, Chief Technology Officer of Geocent. “It is a platform that allows emergency managers to better operate in critical situations and to share situational awareness. We received follow-on funding from Governor’s Office of Homeland Security and Emergency Preparedness (GOHSEP) and used this technology during the BP oil spill, Hurricane Isaac and Superstorm Sandy as well.”

Geocent then used that core technology for its Navy customers to integrate weather data. Multiple Phase III contracts with the Navy soon followed, including a $22.1 million award from SPAWAR to work with the agency in San Diego on command and control technologies, capabilities and Internet operations. Additionally, Geocent was awarded an SBIR Phase III competitive contract to provide the Naval Oceanographic Office (NAVOCEANO) the ability to display their forecasted ocean weather data and observations of current ocean weather data on a  geospatial map so that it can be viewed on tools such as Google Earth and other Open Geospatial Consortium based map viewers.

For its Department of Homeland Security customers, Geocent is continuing to provide Geospatial Technical Support Services (GTSS) under a Blanket Purchase Agreement worth $98 million – which was awarded to Geocent and three other small businesses. Through this agreement, DHS will secure geospatial technology services to produce maps of natural hazards such as floodplains, as well as assess critical infrastructure risk and vulnerabilities. DHS also has a goal to use the technology to track and monitor law enforcement activities and support reconnaissance operations, conduct urban search and rescue operations to recover survivors affected by disasters, plan security operations for special events, and facilitate vessel and cargo tracking and inspection.

Geocent’s hugely successful stint in the SBIR arena is a testament to its team, who looks beyond the initial award and sees what potential exists in the marketplace for a particular technology.

“Commercialization is something we look for in SBIRs and in fact Phase III is a big thing for us to strive for,” explains Ridge Bourgeois, Federal IT Sector Director for Geocent. “The SBIR program has been a cornerstone of where we live and operate in terms of the innovation perspective, and we still try to be on the cutting edge and to solve the technical solutions that otherwise would fall to the wayside without the program. As a small business, you are busy in operations and maintenance of things, but with SBIRs we can continue to expand in our core competencies of software engineering and data integration and push the envelope.”

Continuing on its SBIR journey, this year Geocent was awarded a NASA SBIR to develop earth science data processing algorithms in the cloud. This ties in two of the company’s core capabilities – data processing and geospatial data. Since NASA collects a great deal of earth science data with satellites, they want to make this information readily available to the public.

“What we are doing is instead of just having data in the cloud, you can also have processing in the cloud,” adds Alphonso. “Raw data is one thing, but to have the ability to process that data for specific purposes is the value that we are bringing. Maybe you want to take an image of the coastline and compare that image to one taken five years ago to assess coastal erosion. Those are the types of things the algorithms can provide.”

The state of Louisiana also continues to be a great customer for Geocent, who was honored with several awards in 2014. In addition to the coveted 2014 Tibbetts Award from the U.S. Small Business Administration, Geocent received the Boeing Performance Excellence Award, along with the Marshall Space Flight Center Small Business Subcontractor Excellence Award. With the government’s demand to increase its technology platforms each month, 2015 is shaping up to be the biggest year yet for Geocent.