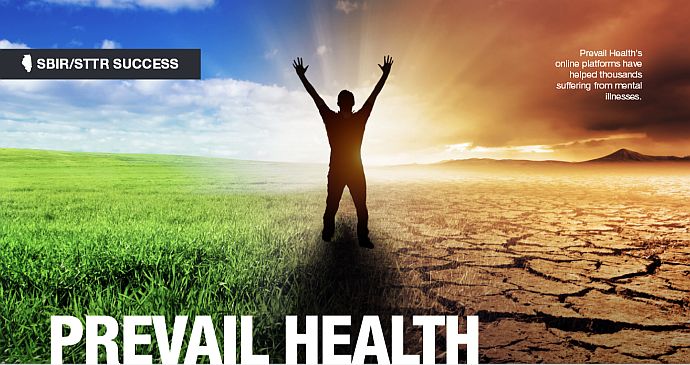 According to the U.S. Department of Veterans Affairs, about 7 or 8 out of every 100 people (or 7-8% of the population) will have Post Traumatic Stress Disorder (PTSD) at some point in their lives. These data show that approximately 8 million adults have PTSD during a given year, which is only a small portion of those who have gone through a trauma.

As a former F/A-18 Navy pilot who served in the Iraq war, company founder and CEO, Richard Gengler, recognized the need for new ways for veterans to access mental health services.

During Mr. Gengler’s time at the University of Chicago Booth School of Business he became friends with a primary care physician and fellow veteran who commented on how many of his patients had underlying behavioral health issues, but refused to see a psychologist. The physician helped Mr. Gengler to recognize the need for online avenues to help treat these patients.

“This is a near and dear topic for returning service personnel and there is a stigma attached to seeking help, as well as a lack of access - three quarters of returning veterans get no care at all. We realized that face to face treatment could be done over the Internet, but we needed to be able to deliver the treatment in a personal, tailored way,” said Gengler.

In just seven years Prevail Health has become a leader in technology-based behavioral health and resilience building for a wide range of challenges from depression to PTSD to substance abuse. The company’s technology platform provides online care tailored to each individual’s unique clinical and demographic needs. The tool’s clinical efficacy has been demonstrated through two clinical trials and tens of thousands of users indicating that Prevail’s programs are as effective as traditional therapy for 99% less cost. The technology was originally developed to serve veterans and the military, but Prevail now
also serves the needs of civilian populations with several tailored programs. These programs all use the same clinically validated platform backed by multiple clinical trials. Prevail’s personalized digital programs build mental resilience with a combination of peer coaching, online communities and interactive training in a gaming-like environment for an uparalleled level of engagement.

“We had a niche market approach when we began. We built and validated in the military because of the resources available and attention to PTSD, and then were able to take the technology into the commercial space. The military provides an interesting starting place for medical technology because it grows out of necessity – the increasing crisis in military veteran space drove this,” said Gengler. “The problem with behavioral health is that people are reluctant care seekers, especially veterans. If you can get a veteran to do it, you can get anyone to do it. Through our two step commercialization approach we’re now working with the VA at scale as a prime contractor. Based on that we are moving towards finishing and marketing our commercial programs.”

Prevail has received three grants from the National Science Foundation’s Small Business Innovation Research (SBIR) Program.
“We wouldn’t have been able to do this without the NSF SBIR grant, the resources were critical and the technology wouldn’t exist without it. In addition to the financial resources and opportunities for peer review, our program officer was very proactive during our early efforts to build a product and company, and provided excellent mentoring and expertise. Having the backing of NSF was critical to gaining legitimacy and opening other doors.”

The U.S. Department of Veterans Affairs reports that about 11-20 out of every 100 Veterans (or between 11-20%) who served in Operations Iraqi Freedom (OIF) and Enduring Freedom (OEF) have PTSD in a given year, about 12 out of every 100 Gulf War Veterans (or 12%) have PTSD in a given year, and about 15 out of every 100 Vietnam Veterans (or 15%) were currently diagnosed with PTSD at the time of the most recent study in the late 1980s, the National Vietnam Veterans Readjustment Study (NVVRS). It is estimated that about 30 out of every 100 (or 30%) of Vietnam Veterans have had PTSD in their lifetime. Furthermore, According to the Centers for Disease Control, 11 to 20% of women who give birth each year have postpartum depression symptoms. If you settled on an average of 15% of four million live births in the US annually, this would mean approximately 600,000 women get PPD each year in the United States alone. These figures have driven Prevail Health to develop new treatment options for these populations, its offerings include Vets Prevail, Warriors Prevail, iPrevail, Moms Prevail, and Prevail Student.

“We’ve built a disease management platform that covers the life cycle of a patient. It covers the recruitment of patients through social media strategies - 80% of users come from our recruitment efforts and then enter the platform ecosystem,” notes Gangler.  “We’ve built both the console and the games, meaning that you can change the behavior and treatment options without changing the platform.” In addition to getting its start at the University of Chicago, Prevail Health has kept its offices in Chicago and is an active part of the community. The company notes that Chicago has worked hard to cultivate a great start-up scene that provides a lot of resources for early stage companies and makes it easier to attract talent