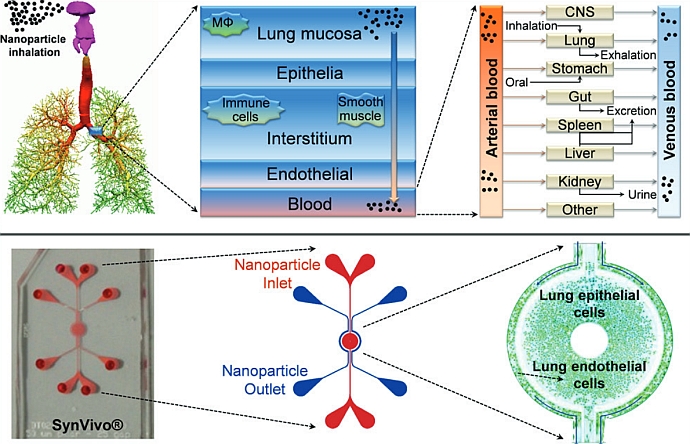 Nanotechnology has grown exponentially in the past decade. Nanomaterials can now be engineered specifically to exhibit unique and tunable chemical and physical properties, which make them central components in an array of emerging technologies. The Air Force continues to lead nanotechnology research for directed energy weapons, optical materials, infrared photodetectors, revolutionary information technologies and other military applications. Even in the civilian sector, there are already over 400 consumer products on the market based on nanotechnology.

However, this rapid growth of nanotechnology far outpaces the knowledge about the associated health and safety risks. Although nanomaterials demonstrate the potential for widespread applications in material sciences, engineering, and medicine, the studies addressing associated human toxicity are scarce. Timely targeted research is needed to define such risks and provide guidance for the safe handling of advanced nanomaterials.

Air Force Requirement
The Air Force and Department of Defense have focused on enhancing current materials through the addition of engineered nanoparticles into existing military systems. However, these materials exhibit unique chemical and physical properties which raise concerns about their potential risks to human health.

To address these concerns, the Air Force requires greater understanding of the nanoparticle-induced health effects on major human organs. Further evaluation is needed on the 1) differences in nanoparticle size, 2) type and dose-specific human organ response and 3) clearance of nanoparticles from the human body. Additionally, efficient methods are needed that rapidly and accurately predict nanomaterial toxicity.

CFDRC’s advanced physiology-based pharmacokinetic (PBPK) models were developed to quantify the relationships between inhalation exposures and nanoparticle distribution and evaluation of associated nanotoxicity levels within the whole body. The integrated CFD-PBPK model provides a novel computational platform to evaluate the size-dependent nanoparticle distribution and clearance dynamics in the human body and to access the associated nanotoxicity

Transition Impact
Current approaches to test nanoparticles’ toxicity to human organs are limited.  Models in or on a computer (in silico) are primarily “fitted” to animal data to simulate individual
organ response to nanotoxicity, but they fail to provide insight into the whole-body human framework. Static tests outside the body (in vitro), with simple flat layer of human cells in Petri dishes, are unreliable and inefficient to test for long-term toxicity. Finally, animal models are expensive, time consuming, and increasingly face ethical concerns.
SynVivo devices can produce levels of tissue and organ functionality not possible with conventional 2D or 3D in vitro culture systems. Developing and integrating such in vitro and in silico models, in combination within the living body (in vivo), preclinical data have great potential to predict absorption, distribution and clearance of nanoparticles, thus aiding nanotoxicity mitigating strategies.

Company Impact
The integrated computational and experimental platform, SynVivo, developed under this Air Force SBIR contract has allowed CFDRC to accelerate the pace and quality of nanotoxicology research in predicting and evaluating their toxic effects on human organs.

“The support from the Air Force SBIR program has further pushed SynVivo as a new startup company, SynVivo, LLC, for developing novel technology that links the high-tech domains of microfluidics and bioengineering for broad applications in the life science arena,” said Joseph Cosumano, CFDRC president. “Our SynVivo platform was recognized as one of the Top 10 Innovations by The Scientist magazine.”

This technology has led to further research and development services and products for U.S. government agencies, such as the National Institutes of Health and the Food and Drug Administration, and several biopharmaceutical companies, to study other disease models. To learn more about CFDRC and SynVivo, visit www.cfdrc.com and www.synvivobio.com